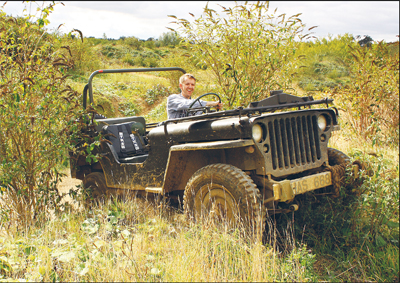 It’ll never get up there,” said Derek, as he looked up at the steep climb up to the high plateau on the eastern side of the Boxgrove site. “Of course it will,” I said.

“But Eugene’s misfiring,” Derek replied. “No it isn’t, those old side-valve engines do idle in a funny off-beat way.” I’d sorted the misfire just weeks before, by the simple expedient of cleaning the plugs, and Eugene was running like a train again – not in the sense that it was blowing steam, but it was making its usual irregular ‘chuff chuff’ noises. “Just put it in second and boot it,” I said.

Derek did so, and Eugene scampered up the slope like a rat up a drainpipe.

Eugene was supposed to be up on blocks for a bit of mechanical care and attention – not that there’s anything seriously wrong, it’s just that it’s such a popular fun car that it’s hard to ignore the appeal of a sunny Sunday’s off-roading, so mud-plugging tends to take precedence over maintenance, and I’d just decided it was time for a grease-up and tidy-up.

Mechanically, Eugene seems to be completely sound, but being French it’s not surprising that it suffers the occasional electrical glitch, little things like the generator deciding every now and then that it’s not going to charge the batteries, and the lights only work when they want to, which is less annoying since we hardly ever take Eugene out at night. The vehicle runs a 24-volt system, which you might think makes it less likely to have starting difficulties, but it draws its current from two, small 12-volt batteries wired in series, and it only takes one of them to be a bit dodgy to bring the whole system down. One of the batteries does seem to be a bit weaker than the other, but, more significantly there does seem to be a small drain when the ignition’s off, even when the isolator switch cuts out the ignition circuit. Part of the problem with tracing a possible short is that Eugene’s wiring was originally well sealed against the elements, so it’s quite difficult to trace specific lines.

You can read more about this Jeep in the August 2011 issue of 4×4 Magazine.