Vehicle theft is rife, especially in rural areas, and we must protect our 4x4s, just as much as our right to drive on legitimate greenlanes by doing it properly

This month’s issue contains some hot topics that are particularly important to any 4×4 owner who wants to ensure the security of their 4×4 and use it as god intended in the right and proper way.

Theft of our beloved vehicles is currently at its highest ever level. Land Rovers, and Defenders in particular, are especially sought-after by thieves, and rural areas are being systematically targeted. One of our colleagues who lives high up in the Pennines has friends who have lost several Defenders and are now considering changing to other marques because it has become an epidemic. We really can’t emphasis enough the importance of protecting your 4×4.

West Yorkshire police did apprehend a gang last year and were stunned by the slickness of the operation. Vehicles were being stolen and stripped for parts within hours or ‘shipped’ off to various places around the UK and overseas. Many entire vehicles end up abroad, particularly in North America, apparently, as demand is so high. Spot checks on the road here in the UK are being carried out and everyone is on high alert, but the police can only do so much. So it’s up to us to do our bit in trying to protect our own vehicles. Anything that makes them more difficult for the criminal to steal will mean they move on elsewhere. 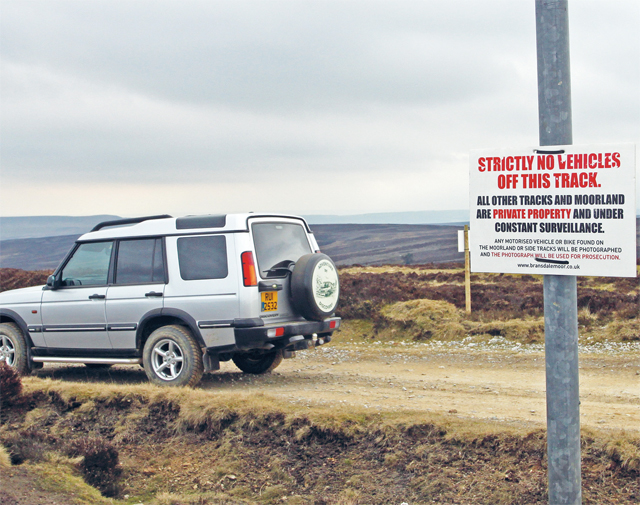 Another place where vigilance pays dividends is eBay. Many items, such as Defender doors, bonnets, are showing up with increasing regularity. All eBay users can keep their eyes open for anything they feel could be suspicious and report it. The increase in Land Rover theft, and one owner’s concern at people taking far too much interest in his Defender, promoted the setting up of ‘LandyWatch’ (www.landywatch.co.uk), a web-based forum trying to recover stolen Land Rovers and sharing ways to make vehicles less attractive targets. Working with police and security product manufacturers, it’s a bit like Neighbourhood Watch, relying on members posting messages with details of stolen vehicles, parts or merely suspicious activity.

Derbyshire Constabulary teamed up recently with Chesterfield Football Club to help protect 4×4 owners in an area, which is also rife for theft. On a Saturday in January an event was held at the club at which free property-marking kits were offered to 4×4 owners. Police marked the vehicles with SelectaDNA, which gives the vehicle a unique forensic code that makes it easy to be tracked. They also provided helpful advice on theft prevention.

These are all steps in the right direction and, if you read our special feature, you’ll take heed and protect your own 4×4 as well as helping out fellow owners by keeping alert. Anything we can do, collectively, to cut out the scum who are responsible for this epidemic can only be a good thing.

Talking of unsavoury people, there are also those who believe that they have the right to charge around in their 4x4s over any part of the countryside that looks like it could be fun. Okay, so that may be a slight exaggeration, but we are still suffering from the idiots who ignore Rights of Way laws and TRO signs. If you are going greenlaning then do it properly and we will all be happy. Another special feature this month offers advice on how to do it. The best way is to join a club which will know exactly where, and in some cases, when, you can enjoy some excellent greenlaning without fear of reprisals or breaking the law; which, of course, we know, dear reader, you would never want to do…

Just as we should report the criminals who are profiting from vehicle theft, we must also report those who are breaking the off-roading laws. Again, like the security issue, there are groups all over the country working with police to stop the lawbreakers and clean up the off-roading act for the good of all.

If, however, you are one of those idiots, then please think again about what you are doing to the 4×4 community. You will only be making it worse for us all and more and more legitimate routes will be closed to us. If we see you we will report you, make no mistake; and you may well be prosecuted…

And, finally, moving completely to the other side of the spectrum towards the best of society, make sure you read my homage to the Race2Recovery guys on page 50 of this issue. Heroes themselves, these shining examples of humanity are preparing to take part in the Dakar Rally next year to raise funds for Help4Heroes. These severely injured servicemen are taking on an immense, in fact, the ultimate, off-road challenge, and so if you can help, please do get in touch. They are the bravest and finest and they deserve our respect and huge support.