This month Hils gets all ‘designer label’ on us and has a moan about terrible seasonal TV – which, funnily enough, does have a connection…

As you will see, this month’s issue contains the annual extravaganza that is our excellent 4×4 of the Year test. We always look forward to the week in autumn when we get to drive the best 4x4s available to us here in the UK and then spend long hours evaluating them to decide which will be crowned the winners of the specific groups and, of course, the overall winner.

I won’t divulge or comment on any of the results here, as I have no idea in which order you will be reading the various features in this magazine, and would not want to spoil your enjoyment of anticipating which have earned top honours.

But you will be aware, I’m sure, that the last two years have seen Land Rover’s Discovery 4 at top of the heap; can it make it three in a row, particularly in a changing market where 4x4s are losing their tough off-roading status in this country? You’ll soon find out (or may have been surprised at our choice, depending on when you read this) and I can vouch for the fact that it was a very tough decision that caused much debate and wringing of hands, scratching of heads and screwing up of faces as well as a good deal of ‘friendly discussion’.

We evaluate the vehicles for their ability on and off the road, whether they are fit-for-purpose and able to achieve their goals. But, of course, vehicle choice is a very personal thing and, therefore, we also had a score for ‘I want one’ – which produced some very interesting results. Some vehicles scored very highly on ability and yet the tester put a very low mark on whether or not they actually wanted one. 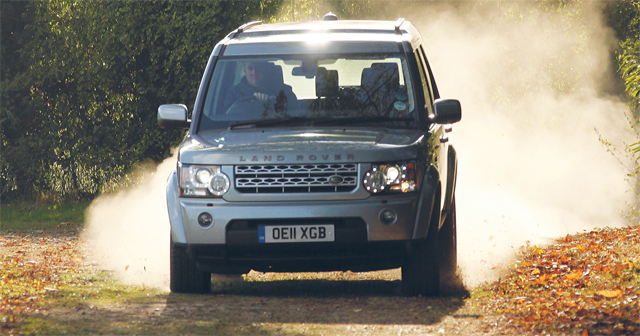 Let’s be honest; it’s all about image these days and even we hardened off-roaders, who really want a truck to get us through the worst that can be thrown at us but in relative comfort, are conscious of whether it looks good while we’re doing it. Yes, even we have succumbed and been sucked into the designer-label mire. It may be a good off-roader and a great on-road drive to boot, but does it have that ‘X Factor’? There, I’ve said it. The dirty word.

Like that horrendous ‘singing’ competition that plagues our TV screens for what seems like an eternity at the end of each year, it seems that vehicle buyers and owners and, yes, even ‘4×4 of the Year’ evaluators are now highly influenced by what the contestants look like, however good or bad their performance on and off stage.

The smooth lines of the stylish and sleek SUV are now de rigeur and we like it. The boxy, cumbersome shapes of the Mitsubishi Shogun and even the Discovery 4 now seem to look a bit ‘so last year’ – although the Range Rover still seems able to get away with its square demeanour. There really is something about the Range Rover, and we all gave it big marks for ‘I want one’. Well, let’s face it, who wouldn’t?!

And we still hail the boxy statue of the Land Rover Defender. The new DC100 concept has caused so much debate among die-hard fans, but even those of us who like the sexier lines and rounded edges that dominate the 4×4 world these days, and are featured on the proposed new vehicle, think they’re just not right for a really heavy-duty workhorse that spends most of its life axle-deep in cow, pig and sheep poo. We should be rejoicing in Land Rover’s new concept, but it’s really a mishmash of about five other vehicles and just gives off the wrong vibe.

So are we merely shallow, trend-led consumers? Or just clinging onto the last remaining slither of traditionalism that is left to us in the 4×4 world? Perhaps both. For example, I love equally the funky style of the Jeep Wrangler and the straight-talking Defender. They both suit their totally different images and are both superb off-roaders, and now the Jeep is a pretty refined on-road drive these days. It may be hard to define exactly why a particular vehicle earns a tick in that ‘Do I want one?’ box; but usually you just instinctively know that it does.

Which brings me to the esteemed editor of our sister magazine Land Rover World. In his editor’s blog Simon Hastelow-Ward actually admitted to liking the new Jeep Wrangler when he gate-crashed ‘4×4 of the Year’ to bring his readers a test of the five Land Rovers currently on the market. Quote: ‘Forget the DC100, this is what the Defender should be…’ I was open-mouthed that a Land Rover publication would dare to pronounce such sentiment, but at the same time also had total respect for Simon’s boldness, sheer bravery and downright honesty. No doubt that blog will prompt a flood of emails of condemnation, ridicule and abuse: but they can’t really argue with that assessment – coming as it does from a diehard Land Rover owner and expert – now, can they?!

Anyway, it’s a Merry Christmas and Happy New Year to you all from me. May 2012 bring more exciting developments in the 4×4 world, and we look forward to all your letters responding to ‘4×4 of the Year’ – let the real debate begin… Hils