What has happened to the small off-roader? Why is it that manufacturers, while admitting there’s a gap in the market, then refuse to fill it?

This month you will see my report on the new Toyota RAV4 on page 18. I was looking forward to the Spanish launch as have always had rather a fondness for the RAV. Well, actually, let’s clarify that. I have always had a fondness for the principle of the RAV. When it was first launched in 1994 it caused a real stir, bit like Mitsubishi’s whacky L200 did when it first dared to burst onto the 4×4 scene with its ‘out there’ design and styling. The RAV4, in three-door guise, caused even bigger ructions. It really broke the mould and effectively created the SUV genre.

That SUV genre has, as we all know, since exploded out of all recognition, and we have been lambasted with copious lookalike crossovers in the last few years, typically characterised by the intelligent 4WD system that drives these pseudo 4x4s. Don’t get me wrong; there is obviously a huge place for these vehicles and we will continue to test and evaluate and praise or criticise wherever necessary, as they form a huge part of the modern 4×4 world. And some of them are really quite good. But what is sad is that the likes of the RAV4 has totally lost their uniqueness and quirky nature. 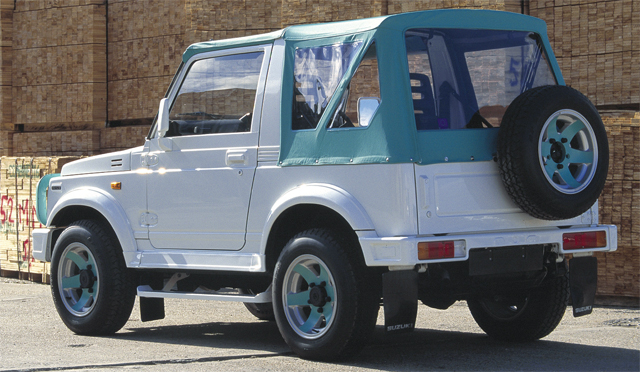 That is why I was so pleased when Nissan dared to force its brilliant Juke on us. Okay, so it’s not a real 4×4 either, but you can lock the drive to maintain equal power to both axles, which goes some way to appeasing this traditional 4WD lover. But what I really love is that it just looks the dog’s bits. It’s selling like hot cakes, looks cool and is a great fun drive. Got to give massive applause to Nissan for that. Indeed, I have to admit that I can see myself buying one in the future. And it will be in that gorgeous deep red metallic livery. I see the very one parked in the street every time I go to my gym and I find myself staring at it for too long every time. Not many ordinary, non-super-car vehicles provoke that sort of a response now, do they?

The RAV4 and the Hilux before it have been the granddaddies of their particular 4×4 genre and it is very sad to see Toyota letting slip some of its 4×4 ‘aplomb’ and the ‘ballsyness’ it once had. Nissan and Mitsubishi have dared to be different, as Toyota once was. But, to be truthful, this latest RAV seems out of fresh ideas.

True, the new RAV4 looks quite sharp, (although that spoiler is not to my taste), but it does rather blend in with all the others of its class. Seeing the very first model at the launch made me realise how far Toyota has stepped out of the spotlight, and I wished it could get back in the driving seat of innovation and uniqueness.

And it could have a chance if it wants to. During the usual Q+A session after the launch presentation one of our number asked whether Toyota had noticed that there was a yawning gap in the small/compact/budget, whatever you want to term it, sector of the 4×4 world. We now are down to only the Suzuki Jimny and Fiat Panda as options, since the Jeep Patriot disappeared and no one else has brought anything like that out. The official response was that Toyota had noted that gap. That was it; we could prise no more info out of them, until over dinner one employee was heard to say, along the lines of:  ‘nothing will happen in that direction’ when pushed on the subject again.

Now, I think that is a mistake. In the old days we had a choice of Lada, Suzuki, Daihatsu, Fiat and Dacia, then the iconic Toyota RAV4 all producing smaller, funky 4x4s; then a bit further up the cash scale, the Jeep Wrangler and three-door versions of Mitsubishi Shoguns, Toyota Land Cruisers, Nissan Patrols and Isuzu Troopers were available.

But, effectively the only three-door that we have now is the Wrangler which appeals only to a minority audience, more’s the pity. Anyway, I would love to see manufacturers entering the compact market offering more affordable 4x4s for younger couples who want some 4WD motoring action but can’t afford the heavy prices of ‘crossovers’, or for the plethora of singletons that the papers constantly tell us are out there, or mature couples whose kids have flown the nest and want something more practical and cost effective.

If I was on my tod I would buy a Jimny tomorrow, or perhaps the new Fiat Panda when it becomes second-hand and more affordable, but only to have two alternatives is a bit rubbish isn’t it?

There must obviously be a glaring reason why this is and I am not savvy enough to realise it, but yes, there is a yawning gap. Is anyone working on filling it? And, if so, who will it be? A part of me wishes it would be Toyota, but I feel pretty sure it won’t be.