I am sitting here looking out on a beautifully sunny and warm early October day having just written the special feature on winter driving and tyres – see page 24. It’s rather surreal to be honest, and I am finding it quite hard to believe that, this year, the heavy snow we now seem guaranteed to get each winter is forecast to arrive in just a few weeks’ time!

For the last two years we have been badgering you, about preparing your 4×4 for the severe weather and also about considering fitting winter tyres for those cold wet days and not just for the predicted snowfall and icy roads.

We can’t emphasise enough the added safety you acquire in your 4×4 with a set of winter shoes from October to March. Okay, so it’s hard to think about fitting them for the dry and hot roads we have at the moment but, by the time you read this, the weather could have changed considerably, so please think about investing in some extra rubberwear – especially if you live in a particularly hard-hit area.

And, please encourage your 4×2 friends and neighbours as they need them even more than we do; and then perhaps they won’t clog up the roads for those of us who know how to drive in such conditions and can go about our daily business and maybe even help out those who need a tow, rescue or just to get to the shops! 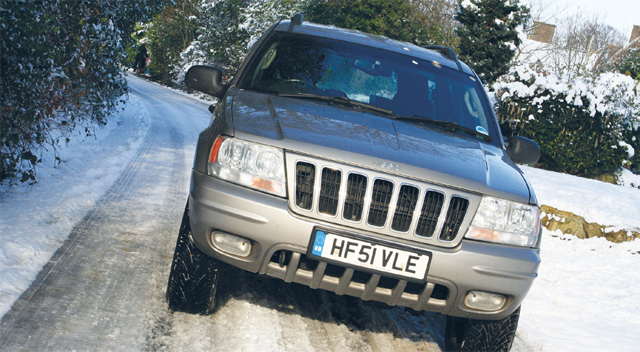 That reminds me about the very welcome, quiet time we have had recently from the anti-4×4 brigade, who seem to have been stunned into silence by the numerous accounts of 4x4s owners saving lives and helping vulnerable people out in bad weather. Let’s keep it up everybody! So it was with huge dismay that I read about the guy who decided he had to drive up Snowdon in his Frontera Sport recently, not once, but twice!

A lot of people asked why he left it there, as it didn’t look terribly stuck that first time, in early September. It appears the reason that he left the Frontera near the top the first time was that he ran out of time and the weather had deteriorated with high winds making it very difficult to drive. He left it lower down to avoid any danger of it being blown off. What he doesn’t say in the BBC video interviews is that he needed to scarper, sharpish, as the guys driving the first train up next morning would clock him. Basically, he thought if he left at 21.00hrs the previous night he could drive up there, take a photo for himself and get back down again in the dark and no-one would have known.

He took so long to get up – “Terrible driving, what was he doing?” was the reaction from some 4×4 experts asked to tender for the vehicle recovery, so he was not a competent off-road driver it would appear? – and that led to his discovery and subsequent arrest. And he obviously didn’t think to take weather forecasts into account. At the time of going to print the second court case, after he did it again a few weeks later, has not been heard. I sincerely hope he gets a rough time.

Much as we all might like to have a go at driving up many of our beautiful peaks, we can’t flout the law. So, Mr Williams, I hope you have learned your lesson. At least he is selling the vehicle and says he intends to donate the proceeds from the auction to charity – the second time he left it up there with a note in the window offering it up for auction, apparently. Well, with the amount of money it’s going to cost him for two rescue bills, he may not have that luxury (nor indeed, a house!) at the end of it all…

Old movies and photos have since appeared on Facebook of Edwardians bouncing up the railway line in a stunning old Model T Ford and it looks all rather romantic, idyllic and very entertaining. Well, that was then and this is now. Snowdon, like so many of our stunning mountains, is out of bounds to 4x4s and that is the way it is, we have to abide by that. This man has set our reputation back again and it makes me sad that we will have to work hard to regain hard-won ground, and all thanks to a tiny minority of rogue off-roaders who just won’t behave.

So, Mr Williams, once you’ve sold your 4×4 please don’t buy another one, but if you do decide to go legally off-roading, please have a few lessons at a professional site beforehand and do us all a favour.