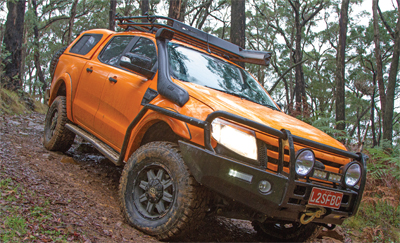 The Ranger is going well. In fact, better than well, I love it. The Ranger has that rare quality these days of driving enjoyment. Most modern cars have the driver involvement engineered out of them like the taste is processed out of food. But the Ranger has that certain interest, that feel that appeals to the enthusiast in me. I can’t quite identify what it is exactly, so it must be the sum of a few parts. Certainly the steering has the right amount of feel, and it’s true the car isn’t as refined as many wagons, but that means you are more part of the car and less isolated above it all. Either way, I love driving my Ranger.

And now an off-road report. I taught an intermediate level course in the bush, and after we finished – on time for a change, I was proud to note – it was still early-ish so I decided to go for a drive. None of the other instructors were keen so I went off to do some easy tracks.

At least, that was the plan. But I was having fun, and the easies turned into mediums, and then difficults, the stuff we use for advanced courses. And it was dark. But I was in the zone, driving the way I rarely get to drive. See, most of the time when I go out I’m leading a trip, testing a vehicle, teaching students or doing at least one other task than driving. But this time it was just me, the tracks, and the car. I could focus on the pleasure of off-roading, set my own pace, no need to worry about other vehicles or anything else. It was like when I drive on a race track in my sports car, an immersive experience, needing enough concentration to clear the mind of everything else, enough difficulty to give satisfaction but not enough danger to worry. And I loved it!  Must do it more often.