Introducing TJ, this magazine’s new Project Jeep Wrangler. Great plans lie ahead for this vehicle, but here we explain how, and why, we have chosen this particular model. 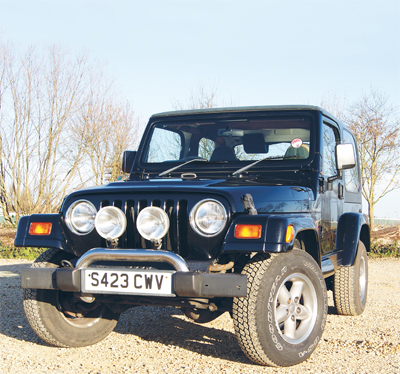 Welcome to our latest project vehicle, a 1998 Jeep TJ. We have chosen a Wrangler as our project because, along with the Land Rover, it has to be the iconic off-roader and therefore an ideal choice. As it happens, prices for this model have dropped to around the £3000 level for an early example, which is another incentive and there is plenty of choice in the market. Besides, I have always been a big Jeep fan, having previously owned two CJ-7s and two Grand Cherokees, so the choice of the Wrangler was an easy one! The Wrangler is rugged and fairly capable out the box and so with a few modifications, can be turned into something special with true off-road prowess.

Over the next six issues we will guide you through our journey starting with a stock example and finishing with a capable off-road machine that’s still driveable on the street. To help achieve our goal, we’ve enlisted the help of some well-known off-road companies and tapped into the knowledge of Jeep guru Steve Fagioli from FTE Engineering. Steve has a rich history of modifying Jeeps, particularly Wranglers and his advice will no doubt prove invaluable during the build up.

For those unfamiliar with Jeeps, the Wrangler body style traces its lineage all the way back to WWII. The first civilian Jeep vehicle, the CJ-2A, was produced in 1945. Introduced in 1948, the CJ range was updated in 1953, becoming the CJ-3B. It had a taller front grille and hood than its military predecessor in order to accommodate the new Hurricane F-Head four-cylinder engine. The CJ-3B remained in production until 1968, and a total of 155,494 were manufactured in the US. Developments continued and, in 1983, the growing market for compact four-wheel-drive vehicles still sought the utilitarian virtues of the Jeep CJ series, but consumers were now seeking more of the “creature comforts” found in standard passenger vehicles. This led to the CJ series being discontinued and in 1987 the Jeep Wrangler was introduced, the YJ. Although the new Wrangler shared the familiar open-body profile of the CJ-7, it contained few common parts with its famous predecessor and mechanically, the Wrangler had more in common with the Cherokee than the CJ-7. The Wrangler YJ had square headlamps, which was a first (and last) for this type of Jeep. 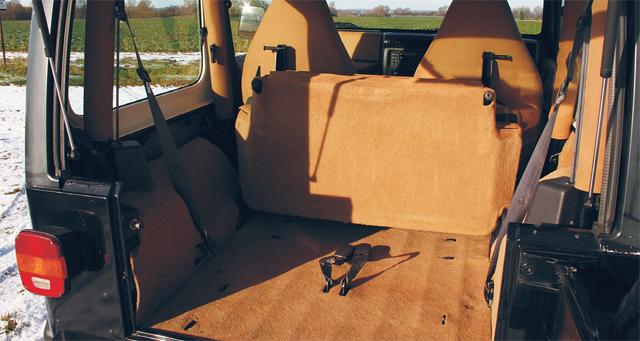 The TJ arrived in 1997, again with round headlights. Nearly 80% of this vehicle was new and it’s fair to say that this is the start of what we all know in the UK as a real Wrangler. One significant difference from the earlier models is that it now featured coil suspension giving greater wheel travel over the previous leaf spring models. The TJ is also easy to work on and the under stressed engines, particularly the six cylinder, are considered bomb proof. Over time the technology has moved forward to include airbags and ABS and the like, but TJs make a great project due to their relative simplicity and massive range of aftermarket parts available.

Our particular example is slightly tired and, as mentioned earlier, completely stock. The service history is a bit patchy but mileage is low at 46,000 – remember this Jeep is 13-years old.In my experience, it’s uncommon to find really high mileage Wranglers; often they are a family’s second or even third cars and as such have a relatively easy life. Rust has not been an issue on the body or frame of our example, except for some light surface rust on the underside, which we’ll be tackling shortly. The chrome side steps however have taken a beating, as they’re directly in the line of fire from road spray kicked up by the tyres so they will be removed.

We’ve chosen the 4-litre six cylinder model over the 2.5-litre four cylinder model as the smaller engine starts to struggle a bit with the bigger tyres we have planned and there were more larger engined versions on the market to choose from. Torque is better with the larger option, at 225ft/Ibs. We have opted for the manual transmission version, primarily as a personal preference and the 4-litre models also benefit from a beefier gearbox compared to the smaller engines ‘box, which is officially rated as ‘light duty’. There’s also the fact that the six cylinder is the more common powerplant in the Jeep range, being also fitted in the Cherokee and Grand Cherokee of the same era. If you are thinking that the fuel economy is going to be terrible, it’s actually not that bad at around 24mpg. 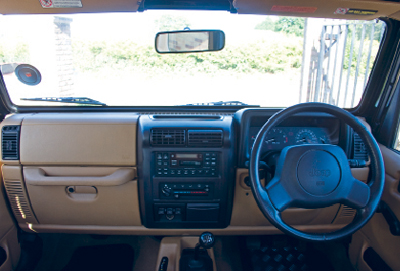 Our example is the premium Sahara edition, which actually doesn’t mean much, essentially it’s a trim level with a nicer interior, colour-coded ‘fender flares’ and body side cladding, extra carpet and those Sahara stickers! In fact with the exception of the Rubicon models, the various Wrangler editions are generally just trim options not mechanical changes. We have also got the benefit of a hardtop and full steel doors, which will be great in the winter, though sadly, no soft top option for the summer.

First impressions of driving the Jeep are a bit of an eye opener. It’s been over 15 years since I owned my CJ-7 and since then the only thing even close to a TJ has been the odd drive in a new Wrangler JK. So it took a few miles to remind me of the experience and get back in the saddle.Essentially everything is as it should be, it starts first time, it stops well and the gears engage smoothly. These are the essentials, everything else is what I’d call ‘charm’. You shouldn’t expect Porsche handling or Range Rover luxury, so just as well I didn’t. The TJ rumbles along at its own pace and if pushed gets a bit noisy and unsettled.

The general lack of clunks and groans is immediately reassuring and the switchgear whilst a bit cheap to the touch, has stood the test of time and works perfectly. The seats are a bit dirty and the carpet well past its best. But peel back the carpet and the metal underneath looks like new.The only obvious problem I can spot is the completely knackered tyres. All four are very low, and to add insult I have immediately got two punctures. A slow leak on the rear offside and a ‘top up every other day’ leak on the rear nearside. I’m not sure quite how the Jeep managed to pass its last MoT only six months ago wearing these boots, the tester was certainly feeling generous. From new, the TJ always looked under-tyred, those arches are quite big and I’m sure Jeep could have offered up a bigger tyre without problems, perhaps the accountancy ‘suits’ called the shots on rubber choice.However, this is all slightly irrelevant as we’ll be addressing the tyres very soon with help from Cooper Tyres, I’ve my eyes on their acclaimed Discoverer STT range, more on that later. 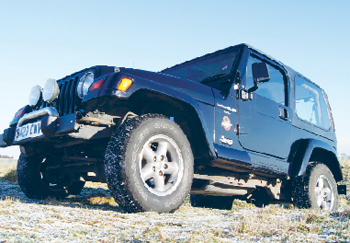 A brief drive around some local wasteland, confirmed the obvious that worn-out tyres are pretty useless off-road, however even with these tyres the Jeep managed to pull up some mild slopes without too much fuss, also it gave me a chance to test the transfer box properly and make sure the limited slip rear axle hooked up.

In my opinion, many Wranglers (in my neck of the woods anyway) come laden with chrome goodies that detract from the overall look. Certainly when new, many dealers would sell side steps and bull bars and more, all in the shiny stuff. The plan for our Project TJ is to remove a lot of this clutter and instead concentrate on purposeful accessories that enhance the capability of the vehicle. To help us we’ll be calling on the expertise of some of the off-road industries best known suppliers, such as Optima, K&N Filters, Rugged Ridge, Rock Krawler, Warn, Rustbuster, Cooper Tires, Goodwinch, Magnaflow and more.

We’ll start the transformation next issue with a visit to Rustbuster to get the Jeep cleaned up and protected on the underside. That way we’ll have a nice blank canvas to work on before we start modifying. In the meantime I’ll get busy cleaning the interior and removing those side steps. 4×4

Are you carrying out your own project? If so, we’d love to hear from you. Send us some pics and info about your project and will add them to the 4×4 Magazine website. 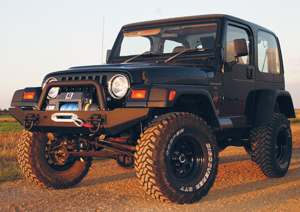 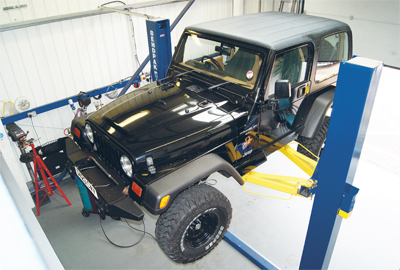