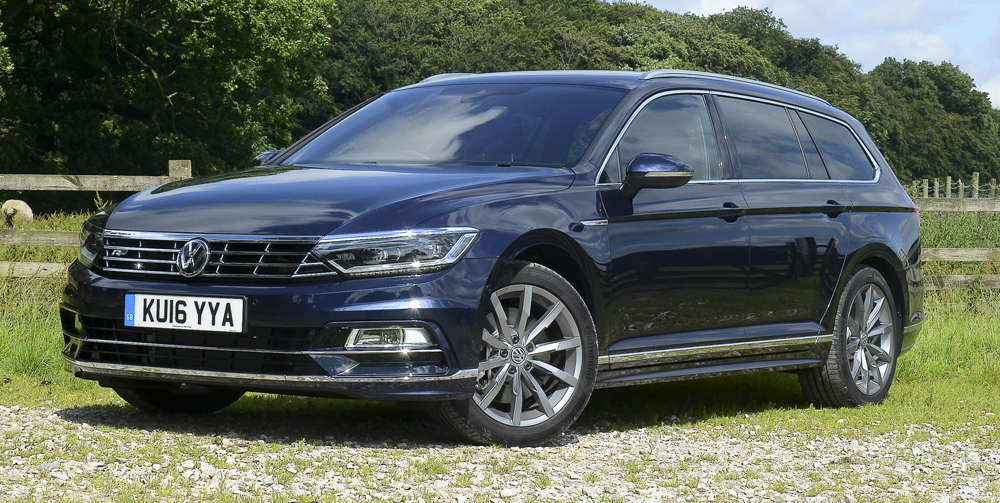 A model that’s been an intrinsic part of the VW line up for over 40 years, the Passat has represented the brand’s medium sized saloon, coupe saloon and estate since its introduction. As with most evolutions the Passat has increased in size over the years, the physical expansion offering owners improved versatility and practicality, the latest model illustrating the Passat’s multi-role capabilities.

The most noticeable difference in the Passat is the new corporate VW front, the slender, full width grille and new LED headlights and twelve individual LED daytime lights giving the new Passat a determined if at times sinister countenance. Complimented by a deep splitter and auxiliary forward looking lighting, it’s the R-Line spec as tested that takes the new look to its ultimate conclusion. High defined arches, an upwardly flowing shoulder line, chromed window surrounds and twin ovoid tailpipes and a ground hugging stance emphasized by 235/45 shod 18” Monterrey alloys coalesce to give the new Passat and understated yet broodingly purposeful presence.

Four large doors and a deep tailgate provide access to the spacious interior, the R-Line race design inspired ergoComfort leather and fabric seating, soft touch surfaces and minimalist layout all coming together to give up to five full sized occupants a feeling of purposeful and comfortable well being. For those seeking a more conventional interior, the S, SE Business and GT specifications still provide more than ample equipment and comfort but for long distance drivers, the R-Line should be a serious consideration.

Adding to the R-Line’s sporting overtones, the thick rimmed, squared off, multi-function sports steering wheel enhances the driver’s feel of the car whilst the 8” central screen and 12.3” virtual instrumentation provide exceptional levels of feedback, car status along with a second, more detailed 3D satnav readout.

Working in conjunction with the immediate directions displayed on the head’s up display, the trio of satnav outputs allow the driver to constantly check that the required direction is being maintained whilst the colourful on screen dials constantly maintain fuel consumption, economy of driving, mph and kph information along with fuel used and remaining. Basically, if there’s information that isn’t on show, it’s not actually worth knowing.

The black roof lining accentuates the cabin’s embracing sensation; the new Passat’s increase in size has significantly improved head, shoulder and leg room whilst the estate’s luggage space now provides 650 litres of space with the rear 60:40 split rear seat in their upright position or 1,780 litres with the seats folded. And for those who need it an extra 100kg can be carried on the roof along with 2,200kg of braked trailer capacity courtesy of the folding tow hitch.

Beneath the bonnet petrol, diesel, Bluemotion and plug-in hybrid engines are available although for most it will be the varying 1.6 and 2-litre diesels that are likely to form the bulk of sales especially for the estates models, power outputs varying from 120hp to the 240hp as tested. Similarly, for those who require a degree of off-road capabilities, the Alltrack offer 150hp or 190hp diesel units.

The R-Line on test was fitted with VW’s latest Euro6 specification 1,968cc 16v, 4-cylinder bi-turbo diesel that delivered 240hp and 500Nm of torque. Twin turbos mean assistance is available from the instant the driver hits the throttle, the smaller turbine handing over to the larger unit at around 2,200rpm which means the car hits 60mph in 6.3 seconds and progresses onto a 147mph top speed, the 7-speed DSG transmission giving the driver the option of standard automatic drive, sport, sequential and paddles.

There are also the optional settings of normal, sport, comfort and eco all of which change the overall characteristics of the car whilst enhancing either economy or performance although the automated 4Motion AWD system remains constant throughout. Paired to a 50 litre fuel tank which gives the Passat a 625 mile range an extended and very mixed 2,450 mile drive from Holland down through France to the border with Spain and back saw the VW return a more than acceptable 45.2mpg mean average with a motorway best of 58.1mpg.

Complete with variable climate settings even sustained high speed motoring in 38 degree heat had no effect on the VW’s performance of consumption. Similarly, the 11.7 meter turning circle gives what is actually quite a sizable car useful maneuverability, whilst minimal driver effort was required on motorways, general A-roads, B-roads and narrow passes, the Passat equally at home whatever the circumstances. The most notable aspects of the latest bi-turbo Passat are the impressive reserves of power, the planted, surefooted, neutral feel of the car even when pushed hard on corners, the sheer comfort and ease of driving, the constant yet uncomplicated amount of feedback the onboard systems generate and the all round radar and camera systems that keep the driver abreast of approaching vehicles and the car’s general surroundings.

If there were negatives they were the at times slightly harsh ride and tyre noise generated by the Continental ContiSport tyres, on all but the smoothest of surfaces the rubber transmitted both into the cabin and the steering wheel. Similarly, the head up display was for me to low given my ideal driving position the end result being that since I had to lower my head to see it, the facility was for me redundant. However, slightly shorter drivers will be able to take advantage of the multi-function display.

However, in no way do these minor critiques detract from the R-Line 4Motion Passat Bi-Turbo Estate in any way. This new VW is extremely accomplished, impressively capable, delivers economy especially over long distances, provides the driver with notable levels of ergonomic comfort and ease of driving combined with a stress free, comfortable environment and looks that belie the car’s levels of performance. Equally, Volkswagen’s almost legendary levels of quality and attention to detail also shine through to produce an estate car that really is able to be all things to all drivers.

As tested the Passat Estate R-Line 2-litre BiTDI DSG 4Motion will set you back £37,515 although fortunately it only says Passat and 4Motion on the tailgate. And like all VW’s a variety of favourable purchase, lease, contract and service plans can be had all of which make ownership or possession reasonably attractive. And with decent taxation figures this new Passat should keep your accountant happy in respect of company car expenditure.