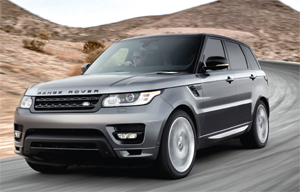 First impressions of the all-new Sport are that this is going to be the Range Rover that everyone wants, such are the options available – a real Sport for all. Even low range is an option…

When you hear announced that the new Range Rover Sport is ‘one of the most road focussed vehicles we’ve ever produced’, there could be a tendency to worry. But then the Sport has always been the more road-biased of the range, which has, since its introduction in 2005, opened the model up to a new market segment. It’s been a great seller, with some 380,000 sold around the world, the majority of which have been in the US, with New York the model’s best-selling city. But as enthusiasts, are we to bemoan that the latest Sport is taking too big, and too fast, a step down US highways and turning its back on its true heritage?

Given those sales statistics, it’s no surprise that the new Range Rover Sport was unveiled in New York at the end of last month, in a particularly clever, hi-tech and glitzy fashion. If you always thought that the previous Sport was the brash younger brother in the range, not aimed at true enthusiasts, and too often fitted with big wheels and tasteless body kits – more a modified Range Rover for owners who don’t appreciate what they are driving – then there are some more surprises for you.

The latest Sport is certainly not a tweaked version of the latest Range Rover. It was, of course, developed alongside the latest Range Rover, but the Sport actually has 75 per cent unique parts, much of which have gone to give the model a distinctive look. The result is that there is now a clearly defined Range Rover model range, with the Sport sitting between the Evoque and its bigger brother, with perhaps the most interesting news being the variety of options available within the Sport model list. It seems, for instance, that you can now select whether you want a model with Low Range…

As you would expect, the Sport has the all-aluminium body structure unveiled on the new Range Rover. Pressed panels, plus cast, extruded and rolled aluminium alloy parts, gives the Sport exceptional rigidity where it’s needed, but is considerably lighter; the new Sport is a staggering 39 per cent lighter than the old model. And this despite the fact that it is actually 62mm longer than its predecessor. The wheelbase is significantly longer, having been increased by 178mm, it has shorter front and rear overhangs, is slightly wider than the old model (plus 55mm) giving it a squat and purposeful road appearance. This adds up to a body shape that is actually eight per cent more aerodynamic than the older vehicle – hopefully no need, therefore, for anyone to consider adding any stupid body kits… Looking at the photographs here, you can see the clamshell bonnet, ‘floating’ roof and side vents, plus the wheel arch graphics and distinctive horizontal body lines – used so well on the Evoque. These features make the new Sport a distinctive model in its own right, not just a version of the big brother Range Rover.

To read the full report see the May 2013 issue of 4×4 Magazine. Buy the issue or subscribe here