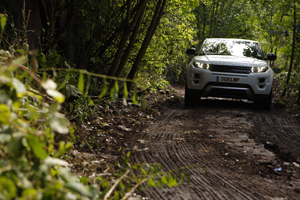 Finally we have had the opportunity to get behind the wheel of the much-heralded Range Rover Evoque, off-road across some difficult tracks in Snowdonia National Park and under the streets of Liverpool. Yes, that’s right, under the streets…

It became obvious as we descended the track at the end of our Snowdonian drive. The narrow route was steep and a number of uneven boulders poked through the damp sandy soil, just before a tight ‘S’ bend through some trees. Sensibly, the vehicle in front had slowed, the driver checking that Hill Descent was engaged, reduced the selected speed to the minimum and inched forward. It was then clear. The new Evoque is undoubtedly a Range Rover.

As the front wheels cleared the first boulder, the nose dipped into a deep rut and the Evoque’s – undoubtedly good-looking – rear, rose on the nearside to clear the mound. From our viewpoint the clearance and wheel articulation was obvious. Clear daylight could be seen underneath the car and it gently negotiated the tight twist, controlled and without fuss. When it was our turn everything happened much the same, the only difference being that it seemed far less dramatic. Had we not stopped to watch the other Evoque, conversation in the cabin would have continued about how superb the drive across the Snowdonian National Park had been – so competent was this new Range Rover, that you could sit back and enjoy the view.

That’s the overriding impression with the Evoque, formed after two days of driving both on, off, and even under the road. It is a bold, some might say brash, design. It is a striking, ‘look-at-me’ kind of car. It will be parked in a Premier League football team’s car park, it will cruise the nightspots of LA and it will be seen in Casino Square, Monte Carlo but, most importantly, it is equally at home greenlaning the valleys of North Wales. Trust us, this is a worthy new member of the Land Rover tribe destined, undoubtedly, to be one of the company’s major global success stories.

We have already published a detailed technical feature on the Evoque (4×4, June 2011), but here is a brief resume of what is available in the model range. There are two body styles; coupe and four door. From our technical feature, regular readers will remember that the Evoque is the production version of the LRX concept car that was first shown at the North American International Auto Show in Detroit in January 2008. The LRX was most definitely a coupe with two doors and a hatch, it was not designed as a four-door vehicle, which meant that as the decision was made to go into production, the engineers had a problem. The result is impressive in that it ‘looks’ as though it was a simple case of adding two extra doors but it was not. Proportions have changed, even screen rake angles, but you would never know!

There are then two engine options; the all-new turbocharged 2.0-litre petrol engine and an updated of the TD4 turbo diesel unit – available with two power outputs, 150bhp, and 190bhp (designated SD4). It’s smooth, quiet and highly competent. The Si4 turbocharged petrol unit has a significant power output of 240bhp. This engine responds best when the ‘Sports’ mode is selected on the gearbox, and the Evoque is fitted with the Dynamic mode, with the MagneRide suspension, as this sharpens the vehicle’s handling significantly. Manual and automatic gearboxes, both six speed, are available but we have so far only driven with the autobox.

When it comes to trim levels, the list at first appears bewildering, but befits a prestige vehicle of this class, built by a production process that only builds cars that are ordered – meaning there’s no need to ‘guess’ which model people will want. Interestingly, for example, of the 20,000 confirmed orders already placed, some 60% have specified the panoramic glass sunroof, certainly more than was originally expected.

To read more about the Evoque see the September 2011 issue of 4×4 Magazine.