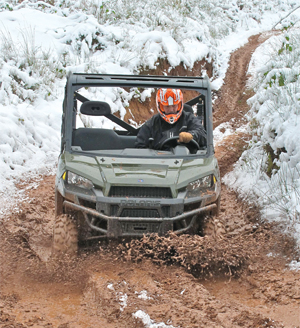 For some years the Polaris Ranger has been the side-by-side ATV to beat. For 2013, it’s got a new chassis and engine. Is it still the best ATV on the market? We froze to death in January to find out. Boy, it was great fun!

The terrain was harsh, heavily potholed and the pace was faster than I would have liked. My mind and body was expecting spine-jarring impacts as the Polaris XP900 skipped its way across the rough terrain of the Peckforton Castle Estate. But the impacts never materialised as the 10inch long-travel, adjustable suspension at the front, and fully independent at the rear, fitted to the all new chassis, seamlessly ironed out the challenging Cheshire Estate tracks.

It was sub-zero temperatures aboard the new Polaris Ranger XP900 ‘sideby- side’, my fingers were frozen and my face chilled by the passing cold air, but that didn’t seem to matter. Having used Rangers for many years and witnessed the moderate progression of the now iconic, ‘side-by-side’, this year’s improvements are more impressive, for one the power plant is all new. The British-designed Pro Star 900 engine is a parallel twin cylinder, four stroke, producing 60bhp and more importantly, a class leading 54lb ft of torque.

The new electronic engine management system delivers optimal torque and horsepower at all speeds and altitudes. It also offers a silky smooth throttle at all speeds and most importantly in reverse, which aids driving enormously. With all that extra power, the new Ranger can easily tow up to a ton or haul 453.6kg in the cargo box. This new pallet sized cargo box is actually the best I have used, and it’s fitted with more sturdy tie-down points to secure the load. Polaris has designed the exclusive Lock & Ride system that accommodates many hard-working accessories that can be attached or removed in seconds; also the easy to operate gate release was very welcomed. The much-improved ergonomics of the Ranger’s cab provided superior comfort over the hard frozen Estate ground, with ample leg room and a tilt steering wheel; it all made for a pleasant cockpit. Driver-centred gauges provide quick readouts and the sliding driver’s seat positioned me perfectly for the pedals. 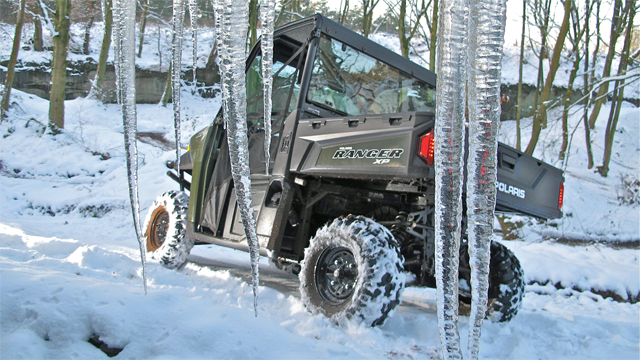 Very useful under seat storage has been made possible by moving the new 900cc petrol engine further behind the cab, so consequently engine noise and harshness is much reduced. Another big benefit of shifting the engine back is the reduction in cab temperature in summer months, something I would have been happy with on my sub-zero Cheshire adventure! However, if you opt for the popular three-cylinder Yanmar diesel Ranger, the engine remains in its traditional under seat position. The diesel thankfully is available in the new chassis, so will be a popular choice for most UK users as running costs are forever rising with fuel costs and the diesel offers 40 per cent more range than the 900 Efi petrol option. The 904cc diesel engine gives 90 per cent of peak torque available at 1600rpm for low speed pulling. It is held in place with serious isolation mounts, thereby reducing low vibrations that you often get with a diesel ‘thumper’. The on-demand transmission is fully sealed and impressively keeps you moving with true four-wheel drive.

To read the full report see the April 2013 issue of 4×4 Magazine. Buy the issue or subscribe here