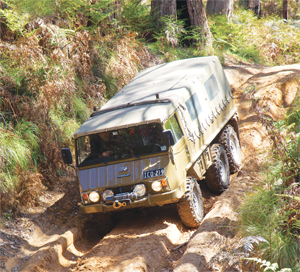 If four-wheel drive is good, then does that mean six is better? We take a trip in a recently restored Steyr-Puch Pinzgauer 6×6 to find out. Now this is a real man’s off-roader!

Words and photographs by Robert Pepper

I’m standing halfway down a very rocky hill, one I’ve had to winch up in the wet before now, and even competition trucks take a second look in the dry. The line, shown by recent tyre marks, zigzags out to one side, around the worst of the rocks that protrude high from the track. I’m waiting for Peter “Professor Pinz” Farrer to come along in his Steyr-Puch Pinzgauer, and I reckon as he curves the vehicle around those rocks I’ve got my shot.

Except he doesn’t. The Pinny comes straight down the track. Right over those rocks, under complete control, with just the barest of scrapes. I quickly reposition myself and shoot anyway. As the Pinny passes, I turn back to what it just drove over and take another look. Yep, it really did just drive over rocks that Jeeps and Nissans on 37inch tyres couldn’t handle. Takes a bit to impress me after all the years of off-roading, but I’m standing here in appreciation. And you know what? This is a completely standard vehicle.

We went everywhere that day, on tracks I use for advanced courses, and tracks I use when the boys and I want a challenge. The Pinzgauer ambled up and down them all, unfussed, unbothered, never feeling like losing traction for a moment. It is not a good off-roader, it is a great off-roader, and the reason why lies partially in the specification, but also in the ethos of the company that built it.

Steyr’s first products were rifles, then cars were built in the mid 1910s and the company more or less specialised in military, utilitarian vehicles. After becoming Steyr-Puch the company also built trucks, buses and heavy tractors. So when they came to design a small 6×6 off-road vehicle in 1970 it was with some considerable experience in the art and science of designing things that just needed to work in tough, no-nonsense environments, and it cannot be a coincidence that the Pinzgauer is named after a respected Austrian draught horse, an animal built for work, not speed. 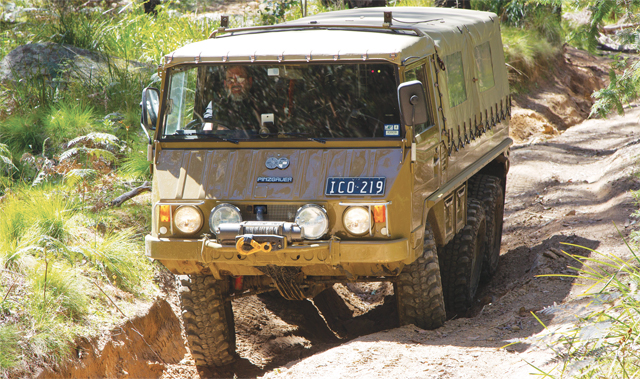 So what did Steyr-Puch do that made the Pinny into such an incredible off-roader? Let’s start with the tyres, which are 32inches tall, although on this one Peter has used 35inch tyres. A 32inch tyre isn’t anything special these days (not like back in the ’70s), but that’s only the start of the story. Under the body are portal axles with independent suspension, lifting the chassis up and away to an amazing 340mm of ground clearance.

To read the full report see the March 2013 issue of 4×4 Magazine. Buy the issue or subscribe here