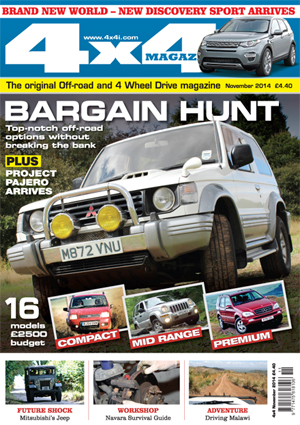 There’s a bargain out there with your name on it

This is being written on the last day of football’s ‘transfer window’, a time where seemingly ludicrous amounts of money are paid for players around Europe. Now, while I’m something of a football fan, of both the game and the even more ludicrous ‘soap opera’ machinations that surround it, I am also aware that many readers are probably not – some people seem to dislike all things football with an almost religious zealotry. I mention it solely because you could say that this was our ‘money issue’, where we take a look at what is available in the 4×4 market for very little – and it also coincides with some ‘deals’ in the market that make football transfers appear almost reasonable. After all, would you pay £83,000 for a Toyota Land Cruiser FJ40 of 1980 vintage? Probably not, but it shows that some interesting model 4x4s are now making it into the international classic car world, in this case the FJ was sold at the super-posh auction at Pebble Beach, USA. And then there’s the very first Range Rover, chassis number 001, going under the hammer just after we closed for press. Initial estimates are that it will go for around £140,000 (see Marketwatch, page 96). As you read this, you’ll know what has happened, but you can be sure that even if I had the money, my hand would not be raised at either auction. And you are not likely to see either vehicle at your local pay ‘n’ play site any time soon!

Which is why we decided to look at the more sensible, user-friendly, 4×4 market and set our budget at £2500; not a ridiculously high amount of money, but pleasingly an amount that could see you grab a serious bit of kit. The range of models available is quite astonishing, and while we have mentioned the expected options from the likes of Land Rover and Toyota, we have cast a wider net, which means there’s something out there for the pay ‘n’ play enthusiast, the family owner or even for the customer who wants something in the premium bracket – after all, who would have thought that a BMW or a Merc could be had for so little?

Of course, you could be buying yourself some expensive trouble; a bit like the Liverpool manager’s decision to buy one of football’s ‘bad boys,’ Italian player Mario Balotelli. What you can also guarantee, however, is that he will bring a lot of entertainment over the next year or so, much like the 4×4 bargains we are suggesting here! Do let us know if you have just bought yourself a bargain, that’s just what we like to learn about and feature in the magazine.
We will also be following the story of buying a bargain, as regular contributor Paul Guinness has found himself a Mitsubishi Pajero (see page 36). Amazingly, this particular 4×4 was purchased for a lot less than our bargain £2500 budget. Time will tell of course whether it was a good investment and we will certainly let you know as the months go by, but first impressions are very good, and when you pay so little for the vehicle, it means there could well be some money left in the pot for some interesting modifications. Watch this space.

Here’s hoping that you enjoy the issue. Do let us know what you think.