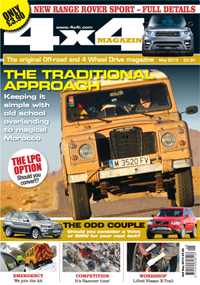 In these times of hi tech complication, smart this and Twit-Faced that, it feels almost cathartic to just get back to basics. And that is certainly what this magazine’s friend and former colleague Ros Woodham has done this issue in her excellent tale of driving to Morocco. Now Ros has a slight advantage over most of us in that she lives in Spain, which is quite a major step nearer the Saharan sands than Surrey, but what we liked about her tale was how uncomplicated it all was.

Firstly, she used her loved, but certainly not pampered, 28-year old Land Rover, and then threw in a tourist map, a compass, her boyfriend and headed south. You can read the story in this issue, but it does make you realise that overlanding is more about the state of your mind than the state of your bank balance. It’s also worth considering that if a trip like this is on your ‘to do’ list, global political tensions are limiting exactly where you can explore; and nowhere is that more obvious than North Africa. Could Morocco be one of the last bastions of overlanding dreams?

From the sunshine and wonderfully evocative landscape of North Africa, my second ‘simple’ message came in the wilds of North Norfolk, a land which last month felt a lot closer to the Russian Steppes than geography would suggest. When the wind whipped in from the east, we were looking at wind chill figures that you wouldn’t expect in deep mid-winter and certainly not in March. There we were, huddled around what must have been one of the simplest conversions possible; a 1978 ex-Army Lightweight Land Rover that was now running on LPG. The conversion had actually been done by the proprietor’s 14-year old son. For me, it was the straightforward nature of the way the second fuel supply had been fitted to feed the 35-year old engine. It might have used the latest LPG technology, and looked nice and shiny, but as soon as a patina of grease and dirt covers the new bits, it will all look as though it was there when the vehicle was built.

It got me thinking about LPG conversions for 4x4s. They are on the increase, quite understandable with the fuel costing around 75p a litre, which can be close to half the price of petrol – certainly down here in the south. The actual conversions are not expensive, as we explain in this issue, and so for owners that do significant miles, it must be tempting. It was no surprise to hear that after Range Rovers, some of the most popular conversions are actually Toyota Land Cruisers and VW Touaregs and many Suzuki Jimnys. Is it something for you? Probably worth a thought, and hopefully we have set you thinking!

To balance the Ying of our super simple Yang, we also have details of the new nine-speed gearbox now fitted to the Range Rover Evoque. Nine speeds! What is the world coming too? It’s becoming too complicated to my simple mind that’s for sure.
Here’s hoping that you enjoy the issue. And do let us know your thoughts.