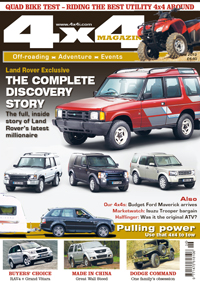 This month, I drove what could prove to be the most significant vehicle that I will ever drive in my motoring career. Astonishing new off-roader? Hardly. It certainly broke no boundaries technologically. There was little that was unique and if truth be told, it wasn’t that great a driving experience. It was functional, perhaps surprisingly well-built and it was unsurprisingly very cheap. So, was it the exotic venue for the drive that made it special? Not quite, and that’s no offence to Leamington Spa. What made it special was that it was a Chinese 4×4, the first mass market model to be imported into the UK. And it will probably be the first of many.

Back in 1966, a few hundred strange, small Japanese sports cars were landed at the UK docks. Cute, but with buzzy high revving engines, these Honda S600s were the first Japanese imports, and they had the motoring sages of the time grunting and muttering ‘they’ll never sell’. Fast forward and we now build Japanese vehicles on these very shores, they are an integral part of this magazine’s monthly content. They dominate our roads. There are two Japanese 4x4s on my drive.

So it would take a foolish man to say that the entry of the Great Wall Steed will be a flash in the pan. More likely, it is the start of a phase of imports from China (both 4×4 and ordinary saloons) that will become commonplace. Is it something to fear, or to be excited about, that’s the question?

You can read what we think of the new Great Wall Steed pick-up on page 20 of this issue. If nothing else, the price will attract buyers and those first movers will get a solid, if soulless, pick-up that has been ‘inspired’ by existing Japanese models. Many other ‘inspirations’ are likely, we may have to wait a while for that unique, technologically advanced Chinese off-roader. Just what affect these models will have on the market is difficult to assess. The first Japanese vehicles that made it to the UK were not taken that seriously, but it quickly became obvious that they were here to stay. It would be a brave, or stupid, commentator to do the same with these new imports.