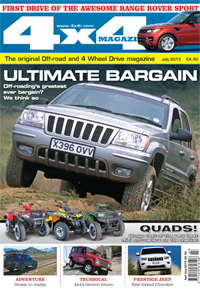 Climbing aboard, I should have realised. The quality of the seats, the trim, the beautifully engineered switchgear is unsurpassed. The sheer luxurious opulence of the vehicle’s cabin is almost over-powering; especially for those of us humans on planet earth that need to regularly budget for their motoring. But even for millionaires, far eastern royalty or even guileless, super rich Premier League footballers, the cabin of the new Range Rover is a fantastic, dream-like place to sit. The model I was driving was trimmed in lush Bourneville chocolate leather, which I must admit, seemed to be a horrible colour to me, but that’s hair-splitting to a ridiculously high level. It’s a simply superb place to sit.

Press the ‘start’ button and the way the circular drive selector wheel rises from the centre console is surely something you could never tire of watching. It has a mechanical smoothness beyond even the futuristic gimmickry you might see on the latest Star Trek movie. Turn the engine off and watch it descend, then on again, and it rises. OK, maybe it’s just me…

My first drive of the new Range Rover was limited, but at least it was on a serious off-road course. All the usual tracks, ruts, mud, sand, and deep wading obstacles were tackled with the usual contempt that such a capable vehicle seems to exude. But then previous, much older and more primitive Range Rovers would have done the same. The new Range Rover has a far superior off-road ride to previous models – and in my experience better than anything else on the market – and that in itself is impressive, but it’s also somehow unfulfilling, almost disappointing. Then we approached the concrete gully. Rough concrete at that, steeply angled and deep enough for me not to be able to see where the two sides met at the bottom. In a ‘normal’ off-roader, this would be the time to get out to check the obstacle. It’s possible that to protect the vehicle’s vital underbody organs, you’d want a spotter to guide you. To be honest, had I been aboard my (highly off-road capable) Toyota Hilux, my decision would have been to avoid the gully altogether. For the new Range Rover you need not do any of that, you simply switch to ‘Auto’.

At a gentle, but constant, throttle opening, you move forward. One wheel crawls over the lip and into the gully. The articulation of the front wheels is then shown on the front screen. Oh, didn’t I mention that the new Range Rover shows you exactly how the axles are articulated, and the direction the fronts are pointing? In ‘Auto’ mode the vehicles multitude of sensors are regulating the ride height, and the traction of the wheels. Going against everything you should do, you are transfixed by watching this graphic. Indeed, it’s almost the only way that you realise that you have traversed the gully as the Range Rover is now on the other side, back on level ground. There had been slight ‘swaying’ as we crossed but so gentle and judder free, you could have done it while holding a full cup of scalding cappuccino and wouldn’t have displaced a single chocolate sprinkle. Was it that impressive? Yes it was, it was awesome. It was also surprisingly, and disappointingly, completely unfulfilling…

When I first started enjoying off-roading, the ability to get behind the wheel, and learn to drive a vehicle over ridiculous terrain often left me feeling triumphant, both for the vehicle and my ability to control it, and use it to the best of my ability – often not even matching the vehicle’s ability, but no matter, I felt good. My problem is that the new Range Rover is simply so extraordinarily brilliant that the bloke behind the wheel now is of less importance than the colour of the leather seats. Don’t get me wrong; it’s not the fault of the talented engineers that have developed this over-whelming machine. It’s not meant as a criticism of any kind. It’s just not for me.