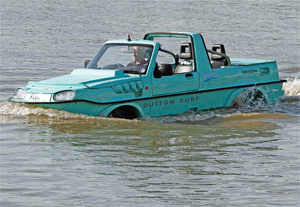 As we all know, 4x4s come in all shapes and sizes, but few can actually float. We meet with Tim Dutton, an endearing character, and founding father of the this country’s kit car industry, with his latest 4×4 creation. Let’s go off-road Surf-ing in the UK…

For most people, an amphibious car answers a question that never gets asked. Surely you only ever want one or the other; a road vehicle, or a boat. Strange, therefore, that when Tim Dutton asks the simple question, “Would you like a coffee?” the only answer is an amphibious four-wheel drive.

When the cappuccino in question awaits you on the other side of the River Arun in Littlehampton, logic says you take the road away from the river to search out the nearest bridge. Not so, of course, when you have a Dutton Surf, since the journey to the local barista merely involves negotiating the gluttonous mud of the river bank, before ploughing into the water, deselecting the four-wheel drive, initiating the jet motor and powering across the fast flowing river to the somewhat slippery slipway, where four-wheel drive is re-engaged for the effortless, and remarkably drama free, exit from the water up to the café.

Unsurprisingly, this unexpected entrance means that many of the café’s clientele leave their mid-morning refreshments to grab cameras and smart phones to photograph the turquoise machine dripping happily in the morning sunshine, complete with seaweed dangling from a rear leaf spring. One customer questions Tim Dutton intently about the vehicle, and Tim responds with equal enthusiasm, explaining the technicalities of the Surf, and proudly commenting that it is produced in his factory on the other side of the river. That’s one of Dutton’s most engaging characteristics; at a time of life when many would be considering joining the retirement set, with nothing better to do than having ‘elevenses’ and moaning about the latest scandal on the front page of the Daily Mail, he’s building amphibian four-wheel drive vehicles, thriving on the engineering challenges that such a project sets him every day, and thoroughly enjoying taking this journalist for a coffee. He smiles and declares: “Well it beats working, doesn’t it?”

To fully understand both what the amphibious Dutton Surf is, and more importantly why, you have to understand the man himself. It’s a name that may well be recognised by readers of a certain age. Tim Dutton-Woolley is best known for producing kit cars, and was the first person to productionise the process, his company growing to being the biggest such manufacturer of kit cars in the world. From 1973 to 1989, some 8000 Duttons were built. At its peak, Dutton employed 80 staff and was producing as many as 22 cars a week, from four factory sites in Worthing, West Sussex. It was in 1982, however, that Dutton found himself in the national news when the Ford Motor Company took him to the High Court, for an enormously expensive five-day case. Ford had written to Dutton and demanded he stopped using the name Sierra for his off-roader styled kit car, since the multi-national company wanted to use that name for the replacement Cortina. For someone who recognises the benefits of publicity, and someone stubborn enough to fight even a company like Ford, the case was a challenge he couldn’t turn down and it made national news – especially when the case was thrown out of court. Dutton had won, and the Sierra kit car continued to be built until 1989. Indeed, the Dutton Sierra is an interesting design. Despite only being 2WD, built on Ford Escort, and ironically perhaps, Cortina components, it had a basic shape of many a more modern production four-wheel drive.

To read the full report see the February 2014 issue of 4×4 Magazine. Buy it here