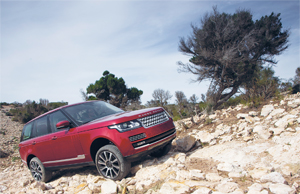 The original Range Rover was to originally have its launch in Morocco but it was scuppered due to some ‘logistical issues’. Fast-forward 42 years and the all-new model has arrived in Africa for a recreation of that original unveiling. Is the new L405 model good enough to live up to its iconic forebears?

The new Range Rover is the most capable Land Rover yet,” so says the literature released from the Solihull SUV maker. Quite a lofty claim, but then confidence in the marque is high right now. The Discovery 4 is one the most accomplished 4x4s in the world; the Freelander 2 is an established all-rounder and recently refreshed for 2013; the Evoque has become the best-selling LR model to date with 85 per cent of its sales coming from conquest customers; while the outgoing Range Rover has consistently sold well, with a peak of 32,000 units in 2010, thereby cementing its reputation as one of the world’s best luxury SUVs. And therein lay the dilemma: how do you replace a car like the Range Rover, which has sold consistently well in its 11-year reign and ultimately has no real direct competitors? The engineers in charge of plotting Range Rover’s future were very clear, following feedback from focus groups, which said: ‘Don’t change it, just make it better’…

We published our full technical overview in the November issue of 4×4 Magazine, but to recap: the crucial improvement to the new Range Rover is its use of innovative aluminium construction, the first SUV to be built in such a way. Employing build techniques learned from sister company Jaguar over the past 10 years has not only saved weight, but it’s imbued the new model with greater strength, better on-road agility and improved green credentials. In real terms it’s meant that the new 3.0 V6 turbo diesel model is 420kg lighter than the outgoing 4.4 V8 turbo diesel, yet it boasts the same performance with better fuel economy and lower emissions.

The switch to aluminium hasn’t come lightly either, if you pardon the pun. It’s required a multi-million Pound investment in the Solihull factory in a state of the art body shop, including the largest single body panel press tool in the world. The switch to ally has also made the production process greener. By holding the shell together with rivets and adhesive, it’s eliminated the need for high energy consuming welding. Plus the Range Rover is made from 85% recyclable materials, with around 8820 tonnes of waste being saved from landfill in the lifetime of each car.

The second innovation that has given the new Range Rover a boost is the Terrain Response 2 system. Aside from four presets – general; grass/gravel/snow; mud/ruts; sand and rock crawl – there’s also now the full auto mode, which uses sensors all around the vehicle that scan 100 times a second to optimise off-road performance regardless of the terrain.

To read the full report, including tech spec, see the Winter 2012 issue of 4×4 Magazine. Buy the issue or subscribe here