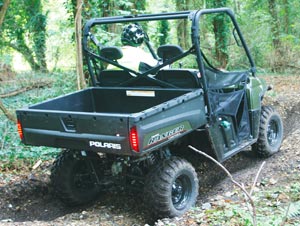 After pressure from farmers and estate workers Polaris rewarded their pleas and has launched the first Ranger side by side diesel-powered ATV.

When the invitation came through to view the hot-off-the-factory-floor new Polaris Ranger Diesel side by side ATV at the Soltex – the show for everyone who works in the estate and sports ground management industry – the first thought was, not much we can tell about it sat on an immaculate trade stand bustling with smart management and no mud in sight.

So, it was with delighted surprise that we learned Polaris had secured the use of Soltex’s venue, the Royal Windsor Racecourse’s purpose-built offroad route secreted in the trees. The downside was that I wasn’t allowed to drive the Ranger in the mud, despite my off-roading credentials, but a quick blast on a stretch of tarmac was the best I’d get, although it did demonstrate the excellent top speed of 35mph. Okay, so that is 5mph less than the previous 455cc single cylinder four-stroke petrol unit, but this isn’t a vehicle built for speed.

So, the new diesel has been added to the range due to popular demand and comes in the form of a three-cylinder, 904cc Yanmar® engine which delivers 24hp and, as mentioned earlier, can power you on the estate up to 35mpg. The need for the diesel was the improvement in fuel economy, which is quoted at 40 per cent more fuel range that the petrol model, depending on operating conditions.

Like the petrol model the diesel Ranger features On-demand true All-Wheel Drive which kicks in when the rears wheels slip. You also get high and low ratios; a dash-mounted switch which allows the driver to switch to all-wheel drive, unlock the rear diff when in two-wheel drive; and there is also a one-wheel-drive option for when the greenkeeper is ambling along the golf course and doesn’t want to tear up the hallowed turf. 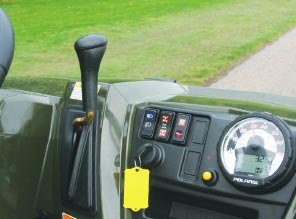 The ranger is a utilitarian ATV with excellent off-road capability with no frills and a very basic design and function. The diesel chug increases its agricultural demeanour, which is no bad thing and users will welcome its improved fuel economy, and the more controlled off-roading ability of the improved engine braking of the diesel. The fourcorner adjustable independent suspension offers a reasonable smooth ride for a utilitarian ATV and the Dual A-Arm has top mounting adjustability with a softer setting for general work or stiffer for heavy-duty.

But the best bit by far is its increased towing capacity. The 400 petrol model will haul 567kg, whereas the new diesel has the power to lug a massive 907kg, at the top of the class, and its payload is a useful 680kg.

As with the Ranger 400 and the Ranger Crew, accessories include self-levelling suspension – when carrying heavy loads the Nivomate® shocks automatically adjust the suspension to create the higher loaded ground clearance in conjunction with a smooth ride – poly can components – including three-glass or poly windshields and wiper kit – and a Warn® integrated RT 40 winch – with 4000lb of pull and remote control plus aircraft-quality cable.

The new diesel comes at a price, which is £12,671.33 including VAT or £10,688 after the VAT reclaim. That’s several grand over the 400 4×4 that we have traditionally featured in our ATV group tests. But for the long life you would expect from the robust Ranger, then the fuel saving will make that far more palatable. 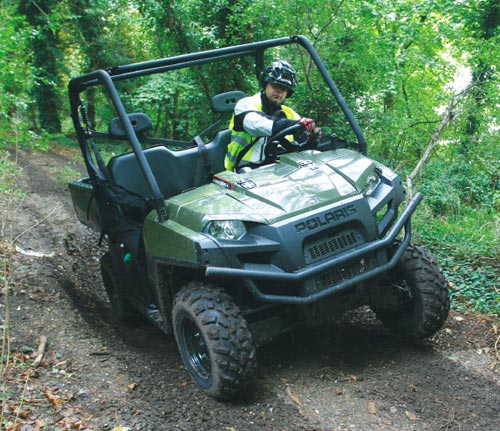 We like: Towing weight, improved engine braking, fuel economy, ground clearance
We dislike: Price, utilitarian feel, lack of standard equipment
Verdict: As a fuel saving ATV the farming estate management community will welcome the long-awaited diesel but will they want to pay that price? If so, they’ll have to be in it for the long haul, but towing weight is superb.
Overall verdict: 7/10