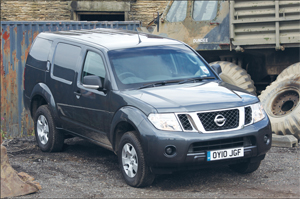 There is not much available these days in the 4×4 Commercial Van sector for a decent price, which makes Nissan’s Pathfinder Van a good choice, as long as you are under six feet tall!

If a pick-up truck remains too down on the farm for you and you find the iconic appeal of the Defender a little too lacking in creature comforts, then the remaining choice of 4×4 ‘van’ for the commercial user comes down to a pretty restricted short list of potential purchases. The Nissan Patrol dropped off the list last year following Nissan’s decision to withdraw the model from sale in the UK, and the introduction of the latest upmarket model Land Cruiser killed off the commercial variant that has been an option on the previous model’s range. If you’re in a business where image is everything, then the Discovery 4 line-up will tick all the right boxes, but the two-seat Commercial version comes with an up-market £30k plus price tag to match the image. That leaves the ageing Mitsubishi Shogun and this, the Nissan Pathfinder Van, the latest 4×4 to ditch its back seats in an attempt to attract the VAT-registered buyer.

Based on the regular Pathfinder, the £22,977 ex-VAT price tag comes in significantly cheaper than the Shogun and similar money to a Defender 110 Van. Given that if you’re looking at a Pathfinder you’ve already dismissed the Defender, this, then, represents the cheapest, full-size 4×4 ‘car-derived van’ that will ensure the nice man at the tax office with let you reclaim the 20 per cent VAT back on the purchase price and means you get away with the £200 annual road tax.

In order to qualify as a ‘commercial vehicle’ the rear seats and seatbelt mountings have to be removed completely and a fixed floor installed to prevent the replacement of the passenger seats. The Pathfinder’s flat floorspace has the addition of six useful tie-down loops, but the poor application of silicone sealer around the joins gave the conversion on our example something of a DIY appearance. Blanking out the rear windows is another legal requirement to qualify for commercial status, but the additional steel mesh over the rear tailgate window is a neat additional touch that should help prevent accidents by cack-handed operatives. 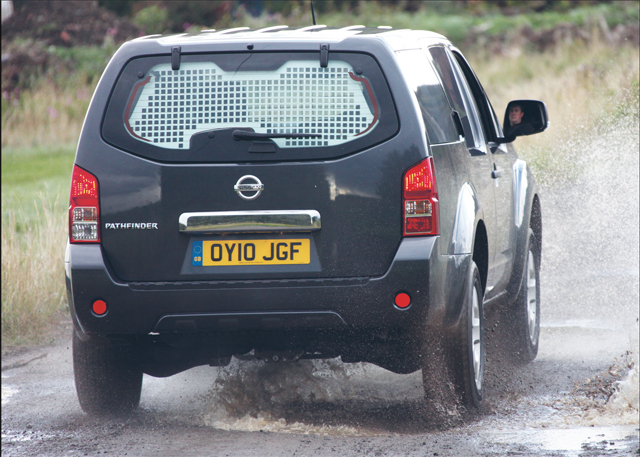 Nissan has made clever use of the void where the second row footwell once was by creating a couple of underfloor lockers for stashing additional kit. The launch of the Van version of the Pathfinder coincided with the introduction of the stretched, seven-seat Pathfinder, so, minus the rear seats, the voluminous loadbed offers an impressive two metres of floor space front to back and 1.1m between the wheelarches.