The one-spec Nissan Murano with a thirsty V6 didn’t really catch the UK public’s imagination, but the introduction of a 2.5-litre turbodiesel version may entice crossover fans to delve into the Nissan luxury brand

The problem we always had with Nissan’s flagship, luxury 4×4 was the fact that it was powered by a really thirsty, albeit lusty and responsive, V6 3.5-litre petrol engine.

Mated to an Xtronic CVT automatic transmission it pumped out a hearty 252bhp with 236lb ft of torque. Impressive figures, but it really was a lost soul in the 4×4 market. Big petrol engines like that were an endangered species back in 2008 when the last revamp appeared, and in these days of extortionate fuel costs the 3.5 V6 one-model-only Murano is even more obsolete in the UK.

So, when Nissan announced that the turbodiesel version was arriving, we were eager with anticipation.
Billed as the original crossover SUV when it was first launched in 2004, the Murano was a delight to drive. It had all the comfort for a sumptuous road drive with that powerful engine and the added benefit of full-time All Mode 4WD with diff lock to retain decent off-road credibility even though it wasn’t going to be a 4×4 to make it into the serious dirt.

It sold in the hundreds, rather than thousands, for a ground-breaking model and soon lost its impetus. We waited a while and it disappeared off the radar, but now we have a more sensible diesel model option. As an alternative to that thirsty V6 we have the far more practical newly uprated 2.5-litre turbodiesel – the dCi – that quotes 35.3mpg on the combined cycle and was first found under the bonnets of the Pathfinder and Navara pick-up. 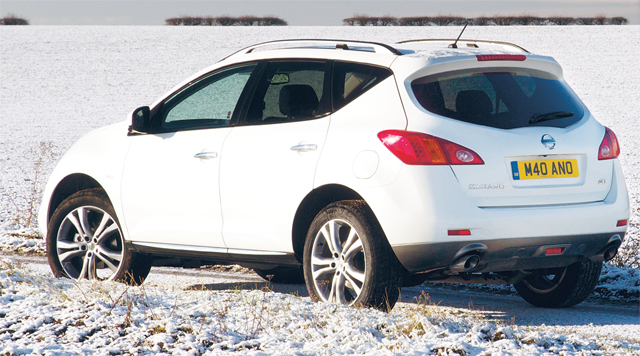 The four-wheel drive system is the All Mode 4×4-i where torque is distributed on demand where it’s really needed. Nissan’s pedigree in offering the more practical 4×4 system, unlike many modern crossovers that have followed in its wake, has not been abandoned with the new Murano as you can still lock drive to all wheels by flicking a switch on the centre console. There is no low range, of course, so we have to live with the fact that we will never take it onto any terrain more technical than a shallow-rutted field.

Verdict: About time that a diesel was offered, which will probably completely wipe out interest in the V6 petrol in the UK. Although still retains full-time 4WD, it is no cross country vehicle, but with lockable 4×4 makes snowy roads and muddy gymkhana fields a breeze. A luxury Nissan for a price, but probably won’t hurt rivals sales too much.

To read more about the Nissan Murano see the May 2011 issue of 4×4 Magazine.