Well, it’s good to kick off the New Year with some encouraging news. As you’ll see in our opening News spread on page 10, Jeep has announced that the brand is fully committed to the UK and the 2011 Wrangler will be appearing on our shores, sometime soon. The new Patriot – also now available in 2WD versions – is also due, as is the much-improved and impressive-looking Grand Cherokee that will arrive in showrooms towards the middle of the year.

After the Fiat takeover everything went very quiet on the Jeep front; vehicles weren’t available and all were extremely tight-lipped about the 2011 model line-up in the UK. So the recent announcement should be met with a collective sigh of relief in the 4×4 community. We are, however, disappointed that the Cherokee appears not to be figuring for us in the UK, apparently being replaced by a brand new Compass, which really has the look of the urban crossover SUV. It will probably do well, and illustrates Jeep’s move into the more mainstream market to meet current demand for such vehicles.

The 2WD version of the Patriot can come as no surprise. Let’s face it, even Land Rover will be offering a 2WD Range Rover model this summer with the Evoque, so this is where we are heading. As long as these iconic marques retain their roots and their 4×4 pedigree remains we can, at least, be hopeful for the future. One thing in the 4×4 world we can now be pretty sure of is the famous Dakar Rally, which once seemed to be doomed after the cancellation of the event in Africa. It is taking place in South America as I write this and, once again, the Eurosport TV coverage is excellent. There’s plenty of incident, not least with our old friend, the long-suffering Robbie Gordon in his accident-prone Hummer, and the race is truly hotting up.

This year there’s another ‘friend’ who we are particularly following, since we had the pleasure of travelling to Spain late last year to join the Toyota/Cooper Tire team for some last-minute testing of the Race Land Cruiser piloted by the veteran Dakar competitor Xavier Foj. I was privileged to be allowed to jump into the co-driver’s seat and be driven around the track at an off-road centre in Spain by ‘Xavi’ himself. He was a lovely guy and the Land Cruiser was incredible, and it is amazing that after nearly two decades of competing in this superb event he still has the same hunger for taking part and succeeding.

He has finished in second place for the last two years and is desperate to achieve that coveted top spot in the T2 production class for the 2011 event. 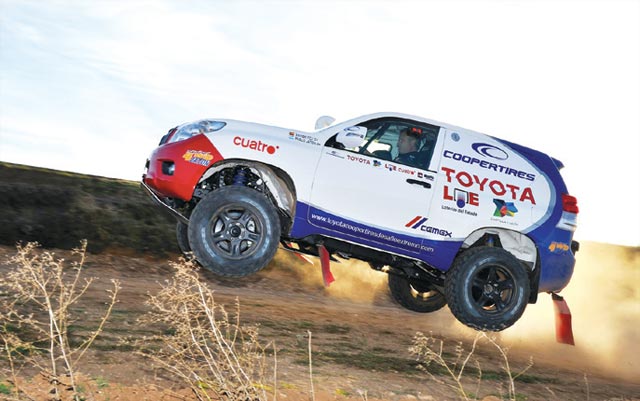 You can read about our day with the team on p60; a full report on the Dakar Rally race itself will appear in the March issue of 4×4.

Elsewhere in this month’s issue you’ll also read about some classic European events that attract the toughest teams from the UK and on the Continent – one of which is an unofficial Dakar warm-up – plus a top adventure here in the UK with two blinged-up pick-ups that really do surpass themselves in the Shropshire hills. And we feature the most impressive, and biggest, private collection of WWII Jeeps in the world, and it’s here in the UK – see page 54 to savour those incredible machines.

So sit back, light the fire, pour a beer and forget the dark, cold and wet winter days and enjoy the best of what the 4×4 world offers.