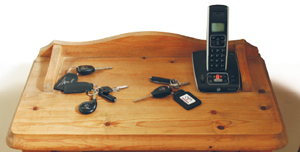 Met up with 4×4 magazine’s Australian correspondent Robert Pepper last month. We had never met face-to-face and while I wasn’t quite expecting corks hanging from a bush hat, I did think I’d probably get a ‘G’day mate’ in a typical Aussie twang. Turns out, he’s an ex-pat, and left these shores over a decade ago, and still speaks English (a fact for which he is to be complimented). We had a good chat about things 4×4, planned some excellent future features and then just chatted about how things had changed since Robert last lived within these shores. One thing he was finding hard to understand was the increase in crime here, compared to his life ‘down-under’. Sadly, I had to agree with him, since only a few days before we had received a knock on the door from one of the neighbours who lives further up the road. Now, we live in what is best described as in the suburbs of Surrey, certainly not some war torn deprived urban wasteland. The very good natured neighbour had noticed that we have 4x4s parked on our driveway and she just wanted to warn us about what had happened to her the previous night. It appears that while she was sitting, alone, watching the TV at about 11pm, she became aware of a strange noise, which was actually a pair of scum-balls trying to jemmy open her front door. Thankfully, turning the lights on meant that the pond life scarpered and left her alone.

When the police arrived – whom she commented were ‘absolutely brilliant’, so, given they often get a bad press, it’s hats off to Surrey’s finest this time, that’s for sure. The officers explained that the morons were actually trying to open the front door on the expectation that the owner had left the keys to the 4×4 on her drive, just inside the front door – as so many of us do apparently. They would grab the keys and drive off. My neighbour had dropped by just to warn other 4×4 owners in the street, which I was very grateful for – as was a neighbour further down the road who declared, “Blimey, I never even lock mine when it’s on the drive!” Guess that his insurance company aren’t actually aware of that fact!

Besides wishing the gutter trash involved catch a particularly unpleasant and incurable psoriasis and that they quickly feel the full force of the legal system, it is a wake-up call for all of us to think a little more about our security. Interestingly, having recently spoken to insurers Adrian Flux about coverage for my ‘new’ Toyota Hilux pick-up (see page 108) they did explain that the rise in 4×4 insurance was not due to increased incidents of accident damage, but was because of the rise in theft. So, be warned, do not leave your keys lying on the table near to the front door, or in view through the window or front porch of your property. It may also be time to consider some additional security, something that we are planning for a future issue.

On a more positive note, let’s hope you enjoy this issue, especially our views on ‘classic 4x4s’. What do you think? Have we missed out on a ‘classic’ that you own, or covet? Do let us know at 4×[email protected]

Enjoy the issue, take care and be safe out there.