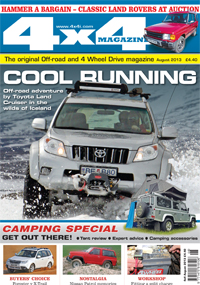 Interesting piece of news this month was to hear that Jeep had produced its one millionth Wrangler. The iconic 4×4 rolling off the Toledo production plant in Ohio looked great in shiny black paintwork, ‘loaded’ with extras and destined for a lucky owner in Florida. When it arrives at its new home. You suspect it will spend little time off-road, and much more with the top down, stereo up, cruising the beaches. Can you still drive on Daytona Beach? If so, that’s probably the most ‘off-road’ the vehicle will manage, but so what? It’s damp, grey and with a persistent drizzle outside as I write this, and so to be honest, I am somewhat jealous and would much rather be pottering about, getting a sun tan in a Jeep. Maybe that’s what most owners do with them, and explains why from that one million-vehicle pool, only a meagre 6987 Wranglers have made it to the UK. Seems a particularly small number for what is such a great enthusiast’s machine. And that got me thinking.

We had our first drive of the latest Jeep Grand Cherokee in the last issue. Already an impressive luxury off-roader, it seems to have got even better. What’s more amazing is the price. It’s a real value for money machine, and that’s a comment from someone who knows that – lucky lottery ticket apart – I will never be able to stump up the 35 grand needed for the new Jeep. But when you compare that to the cost of top end BMWs, Audis and Porsches the VFM quota seems to rise significantly. And that’s before you start comparing it with the latest Range Rover; spec that up, and it’ll cost you two and a half Grand Cherokees, maybe three! Add to that the fact that the Grand Cherokee will knock spots off the German Euro SUVs when it comes to off-road ability, and it’s a bit of a head-scratcher. Why so few Jeeps sold in the UK? The new Grand Cherokee deserves to be a big success in the UK and indeed in Europe, but will it get those deserved sales figures?

Sadly, we doubt it. Is it just brand snobbery? Do consumers still think of the Jeep as a ‘gas-guzzling Yank tank’? Or is it the fact that for many, leaving your Porsche, BMW or even Audi key ring casually positioned, logo-side up, on the bar of your local probably says more about you than the admittedly somewhat retro styled Jeep option. It probably says you are a dork, to be honest. One thing is for sure, however, if you are one of the 6987 UK Wrangler owners, or you become one of the lucky owners of the new Grand Cherokee, we know that driving it is probably a thoroughly enjoyable experience every time you get behind the wheel. Numbers mean nothing really, it’s about personal choice and choosing a Jeep seems a good move to us these days.

Here’s hoping that you also feel choosing this magazine is a good move. This month we’ve been on a fantastic drive across Iceland in the original ‘Tonka Toy’ off-roader, the Toyota Land Cruiser, and then crawl under canvas looking at what’s available for the camping enthusiast this year. There are some great new tents available, after all, who wouldn’t want to sleep in a wigwam? Camping and 4×4 ownership go together perfectly, don’t you think? Much like this magazine and the vehicle parked outside your home – whatever the badge on the bonnet.