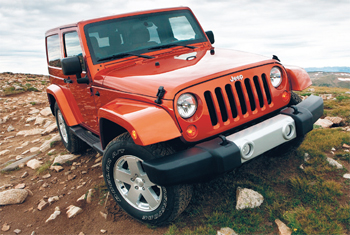 Seeing the glitz and glamour of the Geneva Motor Show on our news pages gives Hils a spring in her step as the 4×4 has truly bounced back for 2011. The last couple of years have been rather lean at the Show, but we can be assured that the market for new vehicles is healthy and there’s more to come

What did surprise us at the Geneva Motor Show was that Jeep is not bringing the new Patriot to the UK this year, and it looks unlikely that it will arrive in 2012, either.

We are rather taken aback at this news from Jeep, because, as you’ll have read on the news pages in the February issue in our very upbeat piece on Jeep’s big presence here this year, the revamped, uprated Patriot was arriving in two and four-wheel drive form and due this May.

It seems that Jeep – or perhaps it’s the Fiat influence? – has decided not to bother with the Patriot and concentrate on the new Compass which seems to be ousting the Cherokee.

The Compass is aimed at the higher, more luxury end of the more compact SUV market. The Patriot is most definitely not at the luxury end – we have always included it as a budget option in our 4×4 of the Year test – even with its improvements, and it is a great vehicle.

So we are very disappointed that it is not coming, particularly as Jeep was forecasting sales figures of 1000 units for 2011 only 500 behind the new Compass.

It looks like there are things afoot with model reviews and some policy changes going on under the Italian owners and we can only wait and see the outcome. But for now, we can only think this is not necessarily a good move.

The latest on the new Grand Cherokee’s appearance is that it is now coming in June; it was May when we last reported in February. We will, however, be bringing you a superb feature on it during an adventure drive to the Arctic Circle in Sweden next month. But we can’t wait to get hold of one over here.

And so to the Wrangler. As you’ll see on our letters page, dealers are now announcing that deliveries are imminent, and we hope to get our eager hands on one very soon to bring you a test report.

In the meantime, this month’s big feature deals with another form of brilliant off-roader in the quad bike. They have been in the news in recent years for high profile celeb accidents, and are often mainly thought as a great idea for Stag Days out, but they are brilliant utility vehicles and shouldn’t be judged purely by the sporting/leisure aspect.

We felt the quad needed some good PR, so here we have a test for those who work on the land and require a versatile, nimble and excellent off-terrain workhorse that will go to the parts other Land Rovers and pick-up trucks cannot reach!
We asked quad bike riding expert, former Camel Trophy winner and dairy farmer, the legendary Bob Ives to be our tester. We had a great day with Bob on his farm for the coldest day of 2011. It snowed on us and the wind was bitter, but Bob managed to brave the elements and bring us a top review.

While Bob was carrying out his expert tests and evaluations on each quad, I was grabbing the keys of those left in the barn 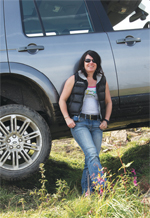 to have a ‘play’ myself.

Quad bike riding is an art, especially with these big powerful machines, and I thoroughly enjoyed myself to my limits on Bob’s personal off-road course. They were all immense off-road; if I had some land and a wad of spare cash I would buy one tomorrow. They are great fun, as well, but, as we prove, extremely useful vehicles for those working on the land and the choice is excellent.

The spring in my step from the Geneva 4×4 success has also been enhanced by the first sight of the sun for 2011, as I push that grey freezing quad bike day in January to the back of my mind.

Spring is a traditional time for new vehicles to appear, so let’s enjoy the burst of colour on those busy forecourts.