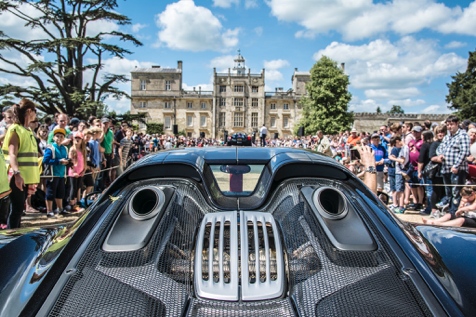 Wilton Classic and Supercar – a major new event for the 2017 international automotive calendar and beyond – is confirmed for the weekend of 3-4 June 2017. The event will take place at the iconic Wilton House, which has been home to the Earls of Pembroke since Tudor times.

Designed as a season-opener, Wilton Classic and Supercar is the perfect place for guests to not only to see and hear some of the greatest high-performance cars of all time, but also to learn about the people that make automotive history.

Wilton Classic and Supercar will comprise over 10 sub-events, each one very different, providing entertainment and fascination throughout the weekend. Details of these will be revealed in the months leading up to the weekend and are shaped around three core events: the Wilton Wow!, the Wilton 6 Nations and the Wilton 100 – Concours d’Histoire.

The Wow! will be a daily gathering of 150 of the greatest supercars in the world – pre-1990 on Saturday, 1990-onwards on Sunday. The 6 Nations, meanwhile, celebrates automotive excellence and culture from around the globe in six dedicated national zones, while the Concours d’Histoire brings together a diverse variety of models with rich and interesting stories to tell. Owners can apply for their car to be displayed at Wilton Classic and Supercar 2017, via the all-new website.

Lord Pembroke, whose fascination with speed, power and all things automotive gave birth to the event, said: “This will be by far the biggest venture I have ever started at Wilton, and is the result of 18 months’ hard work. I have held relatively low-key supercar events here for several years, mostly as fundraisers, and supercars remain central to my vision, but the all-new WCS 2017 will be something very different. We will have around 700 cars on display in a host of different features and will be telling the story of the car in completely new ways. This will be a show like nothing staged before.”

The show has also spawned a new story-telling website – www.wiltonclassicsupercar.co.uk.

More information about Wilton Classic and Supercar, including ticket prices and further event details, will be revealed regularly over the months leading up to the weekend.