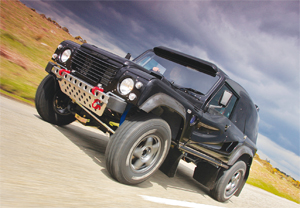 The _ rst street version of the famous Wildcat off-roader has left the production line. Powered by a 4.0-litre Rover V8, the 300STR is capable of three-_ gure speeds over completely unmade terrain. The secret of the success of this model is attributed to the suppleness of its chassis and suspension, derived from its big brothers that compete in ‘raid’ events such as the infamous Dakar Rally, which make it surprisingly easy and comfortable to drive.

And in spite of its 0-60mph in 5.8 seconds, the Wildcat manages to achieve a good balance between performance and economy. The vehicle pictured not only has the usual Wildcat features that make it almost unbreakable – fully welded tubular chassis, four-wheel drive, five-point harnesses, heavy-duty differentials and driveshafts – but also creature comforts, such as air con, bluetooth, iPod dock and stereo ICE.

The boss of Qt Services, Dave Marsh, denies his wife wanted one modi_ ed for shopping but does admit to the chassis’ versatility allowing for a certain amount of customising: “If you consider that the 300STR is essentially a twoseater, there are a number of options open to you and this first production 300STR has been speci_ ed with rear storage for the new owner’s golf clubs!”

For further information regarding the 300STR (or any of the models: 400NSR – a full competition model designed for hill rallies and tout terrain events – and the top spec 500DKR which has the full rally raid package for serious and seasoned competitors) get online at www.qtwildcat. com or call +44 (0)1579 349688 and ask for Andrew Smallridge.