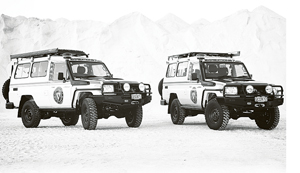 EXPERIENCED North American overlander extraordinaire, Scott Brady, is planning what could well be the ultimate 4×4 adventure trip. As Scott explained to 4×4 Magazine: “In early 2007 I mapped out what I considered to be the ultimate overland adventure; to travel around the world and to all of its continents. I documented nearly every stage and formed the initial logistics and costs – then I waited. As with many of life’s goals, I needed to wait for the best timing, or in this case, the best partner.

“Fast forward to summer 2011, and a casual conversation with Paul May, owner of Equipt Expedition Outfitters and Greg Miller, owner of a few dozen Land Cruisers. I asked him what adventure he wanted to do next. Greg’s response was that he wanted take a Land Cruiser around the world. I shared a few of the details of my seven continents idea, we each shared our personal goals for a trip of this complexity and by the end of the conversation, we found that we were completing each other’s sentences. It was agreed that now was the time, and we were committed to allocating whatever resources necessary to the goal. We wanted this to be purely about the adventure, no compromises; most importantly, we would need to do it without sponsorships.

“The first, and most difficult ‘no compromise’ scenario was the vehicle selection. We both agreed that the ultimate Land Cruiser to drive around the world was the 70 series, examples of which we had each travelled with extensively. In addition, Greg and I had both raced the Outback Challenge (2011 and 2006 respectively) in these vehicles and were confident of their reliability and durability. The question that begs to be asked is, ‘How do you buy a VDJ78 in the US?’ The short answer is that you cannot. We proceeded to purchase the vehicles directly from Japan, and registered them in New Zealand. They will be shipped to Utah for a short period of time, just long enough to be modified and tested. From Utah we’ll drive them to the most northern point of Alaska to begin the first leg of Expeditions 7 – from Prudhoe Bay to the 2012 Overland Expo in Arizona. From there, we will turn the wheels northeast, to Cape Spear on the easternmost edge of Canada.

“From Canada, we will ship to Iceland and meet-up with the team at Arctic Trucks for crevasse training and to utilise their specially prepared Land Cruisers to cross the largest glacier in Europe, Vatnajökull. After the glacier crossing, we will drive the expedition Land Cruisers around Iceland, crossing the desolate arctic desert at its centre. From Iceland we’ll accompany the trucks to Scandinavia, via a ferry crossing, and drive to Nordkapp, considered the northernmost road in the world. After making our way south through the Baltics, we’ll have the vehicles serviced in France before making the long drive across Russia from St Petersburg to Magadan.

“For the Oceania segment, we will ship the vehicles from Vladivostok, Russia to Darwin, Australia and traverse the Canning Stock Route, considered by many to be the longest unsupported overland route in the world. We will also explore Australia’s barren red centre en route to Melbourne where the vehicles will again receive a complete inspection and servicing. From Australia we will load the vehicles on another container ship and proceed directly to Kenya, to cross the Dark Continent of Africa to Namibia’s Skeleton Coast and the port city of Swakopmund. We’ll pick up the journey, and the Land Cruisers, in Buenos Aires, Argentina. After crossing over the Andes the team will take the fabled Carretera Austral, and ultimately Ruta 40, to Ushuaia, the southernmost city in the world. The team will then travel to Antarctica and a fitting end to a round-the-world adventure.”

You have to admit, it sounds quite a trip! Scott contributes to this magazine and looks after the Overland Journal, which he started in 2006. You can follow his exploits of the Land Cruiser project and Expeditions 7 updates on expeditionportal.com. Scott’s feature driving a Suzuki Jimny on the Mongol Rally starts on page 30 of this issue.