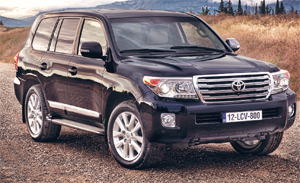 Toyota’s flagship 4×4, the mighty Land Cruiser V8, enters the 61st year of the model range with an even higher level of luxury and claimed improvements to its off-road performance. The most obvious changes will be seen in the new exterior design at the front of the vehicle, with its over-sized bumper and fog lights and new grille.

Toyota comment, however, that the lower section of the front bumper has been sharply trimmed to ensure that the front overhang does not compromise the approach angle when driving off-road. There are new headlamp units, which now include daytime LED running lights. At the rear, the light clusters have been changed to match the new look at the front and the turn indicators on the vehicle are said to be far more evident both front and rear.

Inside, a new lighter colour scheme is available and there have been extensive changes to the dashboard layout, which now incorporates a new audio panel and the facia has a smart black paint finish, with white Optitron backlit dials for the driver.

Under the bonnet there are detailed revisions to the 4461cc V8 turbodiesel engine to ensure it complies with Euro 5 emission standards and this includes new filter and injectors in the common rail system. As well as improving emissions, this is also said to give better throttle response.

Thankfully, this manufacturer still insists that even its most luxurious flagship model should be a competent off-roader. The new V8 has what Toyota claims is the world’s first Turn Assist, which works in conjunction with the model’s Crawl Control function, plus Multi-Terrain Select, Multi-Terrain Monitor and Tyre Angle Display. Crawl Control is designed to give the driver better slow, controlled descents when in L4. It would also help the vehicle free itself when stuck. The switchable Turn Assist allows the driver to make very tight turns without having to reverse and ‘try again’ mid-bend. It reacts to the driver’s steering inputs, braking the rear wheel on the same side of the vehicle as the direction of turn. The wheel braking force automatically increases with the steering angle, reducing the vehicle’s turning radius.

The Multi-Terrain Monitor works with the Toyota’s MTS system and the four cameras scan the terrain around the vehicle, giving the driver a lot more information and eradicating blind spots… or the need to get out and have a look and get covered in mud, one presumes! The Tyre Angle display is new for 2012, which compliments the predicted tyre path guidelines presented on the Multi-Terrain Monitor. The system can be launched via the multi-information switch when MTS is activated. Guidelines linked to the steering angle are projected in real time on the display; moving through seven steps, they show the driver changes in steering angle between zero and 45 degrees. The V8 also gains a new Variable Flow Control for the power steering, which alters the ‘feel’ of the steering, depending on conditions and vehicle speed.

As we closed for press, the specification for UK versions, and therefore the prices, had not been announced, but the new model is said to be available in the UK from March. The Land Cruiser may well be in its 61st year, but there’s no stopping the ol’ girl yet it seems…