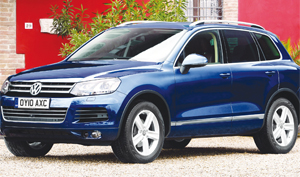 Volkswagen has announced prices for the new Touareg ahead of the first customer deliveries taking place in October.

Prices for the new Touareg start at £38,225 for the SE 3.0-litre TDI 240 PS, while the Hybrid model, which goes on sale in July, costs £54,995. Despite being 40mm longer both in wheelbase and length, the new Touareg weighs over 200kg less than the outgoing model and is 20 per cent more ef cient.

The Hybrid model, meanwhile, can outaccelerate many hot hatches with a zero to 62mph time of 6.5 seconds, thanks to a supercharged 3.0-litre V6 TSI petrol engine and an electric motor resulting in a total output of 375bhp and 428lb ft of torque, while returning 34.4mpg and emitting 193g/km of CO2.