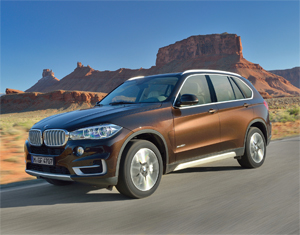 IF YOU ARE wondering what the difference between an SUV (Sports Utility Vehicle) and an SAV (Sports Activity Vehicle) is, you are not alone. An SAV is a vehicle with the “all-roads, all-weather capabilities and the space and versatility of an SUV, with the driving enjoyment of a BMW.” It seems that the BMW X5 was the first SAV and is now in its third generation. The SAV is certainly popular as the first two generations of X5s sold an impressive 1.3 million units. The new models will be available with five TwinPower Turbo engine options – four diesels and one petrol – a standard eight-speed automatic transmission and the option of two or four-wheel drive (sDrive and xDrive). In the UK it will be offered in SE or M Sport specifications. All models are claimed to have significant CO2 emissions and better fuel economy, with equally impressive increases in power and torque. Looking at the picture here, the model retains its visual identity, which at best can be described as conservative. The xDrive intelligent four-wheel drive system is lighter than the out-going models and is now linked to a 3D xDrive display giving real-time details of body roll and pitch in the central information screen, as well as a digital compass display. The new BMW X5 goes on sale in November and will cost from £44,895 OTR as an xDrive25d SE.