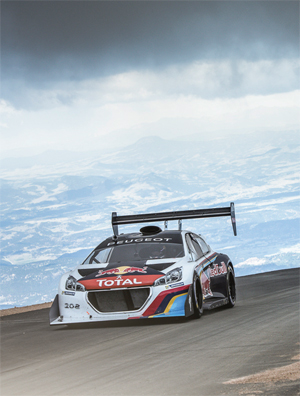 SINCE WE MENTIONED in the last issue the Range Rover Sport’s success in breaking the record for a Production SUV at the recent Pike’s Peak hill climb in America, it only seems fair to mention two other manufacturers; Mitsubishi and Peugeot. Mitsubishi took the honour of being the ‘Official Safety Vehicle’ at this year’s event with the 2014 model Outlander. That’s right, the model is not actually available yet. It has the company’s Super All-Wheel Control (their words, please note), which undoubtedly was tested on the climb’s unique 12.42-mile course that has an amazing 156 corners, and rises to nearly three miles above sea level. Mitsubishi was also competing in the event with a two vehicle 100 per cent electric race car the MiEV Evolution II.

Overall success went to Peugeot in the all-wheel drive racing machine, the 208 T16 Pikes Peak. This race car is powered by a version of Peugeot’s twin-turbo V6 that competes in endurance racing. Weight was the real star, however, and the machine tipped the scales at only 875lb – ironically, that’s exactly the same number as the engine develops in bhp, giving it a power-to-weight ratio of 1:1! The Peugeot was driven by World Rally Champion, Sébastien Loeb and he completed the climb in 8mins 13.878seconds – don’t you just love the timing going to eight thousands of a second?!