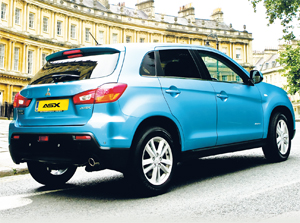 The latest crossover 4×4, the ASX, comes from Mitsubishi and is based on the same platform as the Outlander, giving generous passenger space for a vehicle aimed at the family buyer.

It is offered with either petrol of diesel engines; the diesel 1.8-litre has been developed so that it fits in the Band F to E tax band, thus reducing the cost to £115 per annum. Mitsubishi claims that the diesel can now achieve 54.3mpg in the official combined cycle. The petrol version is Mitsubishi’s established 1.6-litre engine. Towing ability is increased for the petrol version, up from 1100kg to 1200kg.

The ASX also incorporates Mitsubishi’s RISE safety control systems, which means the ASX has the Five Star Euro NCAP rating. Prices for the ASX start from £20,505 for the 1.6-litre diesel version and rise to £25,895 for the top of the range Black 1.8-litre diesel. Models were expected to be delivered to dealers during January.