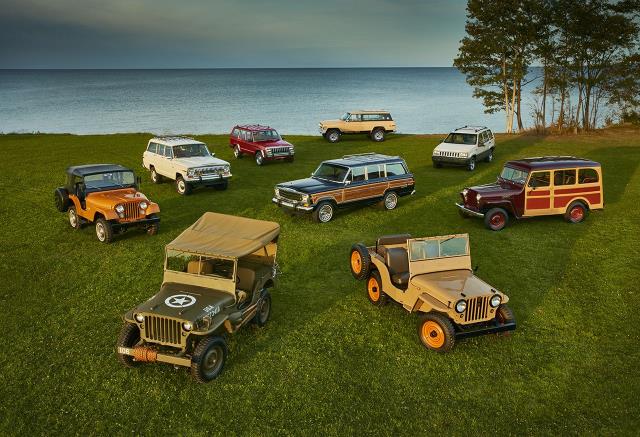 The Jeep® brand history can be traced through 9 fundamental vehicles that not only marked milestones in the Jeep legend, but also allowed to have a pioneering role in terms of introduction of new models and segments in the automotive industry.

These 9 milestone models showcase how the Jeep brand has been a key player in the evolution of the SUV industry and of its sub-segments. From 1941, when the first Willys-Overland rolled off the assembly line to today, the ‘Jeep’ vehicles have been transformed into a faithful work companion in farmhouses, recreational family vehicle and premium car for city customers, anticipating the needs of the customers and introducing important elements of innovation in the market place.

The Jeep legend starts with the Willys-Overland MA/MB (1941-1945). In 1940, with war raging in Europe, the U.S. Government issued a requisition for a ‘light reconnaissance vehicle’ for the Army and invited 135 manufacturers to bid on production. Willys-Overland won the contract with its “MA” design of 1941 (where ‘M’ stands for military and ‘A’ indicates the series number). This early prototype led to the production of the Overland MB: the authentic forerunner of the Jeep legend. Willys trademarked the name after the war and turned the Jeep into an off-road civilian utility vehicle for the farm.

With the 1945-1949 Jeep CJ-2A, the Jeep brand introduced the first modern mass production off-road vehicle, (where CJ stands for Civilian Jeep) and in the same years found inspiration to create the first SUV (Sport Utility Vehicle), thanks to the launch of the (Jeep) Willys  Wagon (1946-1965).

First introduced in 1946, the Willys Wagon made an important contribution to the evolution of the SUV, being the industry’s first all-steel-bodied station wagon, sold as a non-commercial vehicle. Featuring room for 7 passengers, the Wagon also introduced the concept of a multifunctional sports vehicle, offering functionality, versatility and 4×4 capability, all in the same package. In 1949, the four-wheel drive system was introduced for the first time to this model, allowing to combine for the first time four-wheel drive to a station wagon body, and therefore to pioneer the category of the Sport utility vehicles.

In 1955, the CJ-5 is launched (1955-1983). Improvements in engines, axles, transmissions and seating comfort contributed to make it the ideal vehicle to satisfy the public’s growing interest in off-road vehicles for recreational usage, allowing the brand to pioneer this vehicle category. But a milestone innovation was still to come: when in 1963, the Jeep Wagoneer (1963-1983) was launched, the brand could proudly claim the creation of the premium Large SUV. An all-new vehicle from the ground up, the Wagoneer represented also the first time a manufacturer mated an automatic transmission to the four-wheel-drive system. And this was not the only revolution. The Jeep Wagoneer was also the first four-wheel-drive vehicle equipped with an independent front suspension and it also featured the first automatic full-time four-wheel-drive system (Quadra-Trac®) introduced in 1973. Later in 1984, the Jeep Grand Wagoneer (1984-1991) was introduced, replacing the Wagoneer. This model became a premium lifestyle vehicle, popular with celebrities and the general public until the end of its run.

In 1974, the first Cherokee model (SJ  -1974-1983) is produced. This two-door off-road vehicle was based on the Wagoneer, without offering all premium features of that model. Indeed, the Cherokee aimed at attracting a younger public than the Wagoneer and was built to answer the requests of the growing recreational vehicle market.  A next major step in the evolution of the Jeep SUV came with the launch of the second generation of Cherokee in 1984 (XJ – 1984-2001). With this model, that was the first SUV with a uni body, the Jeep brand introduced a further revolution in the market and created the new category of the compact SUVs .

The last step taken from the Jeep brand was to reinvent the SUV that it had created almost 45 years before. With its introduction in mid-1992, the all-new Jeep Grand Cherokee model set a new standard in terms of craftsmanship and refinement in the premium Large SUV market. This vehicle, meant to become the flagship of the brand, was the first SUV to be equipped with a standard driver-side air bag, as well as the first to offer three different four-wheel-drive systems. Another major feature was the Quadra-Trac, a four-wheel-drive system that reacted automatically to road conditions without the driver’s need to shift. Grand Cherokee defined in the years the new standard in terms of style, craftsmanship and performance in the premium Large SUV segment. Through three generations of Grand Cherokee (1999, 2005 and 2010), the Jeep brand enhanced its flagship with new technological features and refined its on and off-road driving performance to reach the excellence of the current model.

Technological innovation is also the hallmark of the Jeep models that were introduced after the Grand Cherokee. As a matter of fact, in 2013 with the launch of the new generation of Jeep Cherokee, the Jeep brand introduced the first rear axle disconnect in the mid-size SUV segment. This system reduces energy losses when it is not necessary to use the 4×4 mode, thus resulting in increased fuel efficiency. The new Cherokee is also the first mid-size SUV to feature a 9-speed automatic transmission. One year later the same technological innovations – rear axle disconnect and 9-speed gearbox – was introduced in the small SUV segment by the all-new Jeep Renegade, the compact SUV the marks the debut of the brand in the small SUV category. A ‘game changer’ as it has been defined, the Renegade fully represent the new ‘Jeep era’ and further confirm the brand’s pioneering role in the automotive history and its capability to anticipate trends and customers’ needs.

But this will be all in a new chapter of our ‘journey’ of exploration of the legendary Jeep brand.