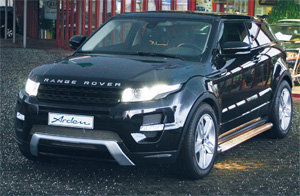 THE GERMAN TUNING and modification company Arden Automobilbau Gmbh has a reputation for working over British vehicles, and so it’s no surprise that their designers have taken the Evoque as the company’s next project. Arden already does a number of conversions on both Jaguar and Range Rovers, as well as BMW’s Mini, so the Evoque was a logical next choice.

As we have seen elsewhere, the first decision has been to lower the suspension, by some 30mm, giving the vehicle an impressive road stance. Cosmetically Arden has changed the plastic body inserts and replaced them with stainless steel mesh grilles, which the company claims gives the vehicle a more luxurious appearance.

Perhaps a little less tasteful is the side bar pipes which are illuminated… Arden has also tweaked the Evoque’s ECU on the 2.2-litre turbodiesel engine to get an extra 30bhp power and 37lb ft more torque. Check out www.arden.de