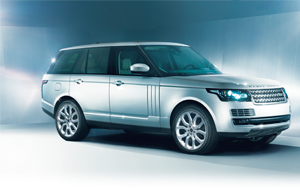 A QUICK CURSORY GLANCE AT THIS  photograph might lead you to believe that the new fourth generation Range Rover had merely had a face lift, and maybe stretched a little. It’s far more significant than that; indeed, what you cannot see from this picture is the fact that, for the first time in its 42-year history, the Range Rover will feature an all-aluminium monocoque body. It uses similar technology to that behind the Jaguar XJ saloon, and the result means a massive weight saving of up to 420kg, that is some 39 per cent lighter to a similar steel body.

Jaguar Land Rover claims that this is the first SUV to use this technology and while it may disturb the traditionalists in much the same way that the DC100 concept did as a potential replacement for the Defender, there’s no denying that this is a very exciting development, and one that further underlines the direction that JLR is heading with its 4×4 model range.

The lightweight aluminium platform has been developed for the ‘completely re-engineered’ air suspension system. As yet there are no further details of what that means, but it is likely that this will produce ‘flatter’ cornering, less roll and road handling characteristics more attuned to what the potential buyers of this new model would expect. Does that mean that the Range Rover will lose some of its world-renowned off-road ability? Not according to, John Edwards, Land Rover’s Global Brand Director, who says the new model, “preserves its unmatched all-terrain ability”. Indeed, the new Range Rover comes with the new Terrain Response 2 Auto system; full details have yet to be announced but this is likely to mean that it will automatically analyse the driving conditions and automatically change the vehicle settings – for many, perhaps, another nail in the coffin of the need for the driver to make the decisions.

Engine options will include supercharged petrol and turbodiesel V8s, plus a TDV6 – probably the new supercharged V6 engine found in the Jaguar F-type sports car. The V6 option will be particularly important in China, where the tax breaks make this a more suitable model than the V8s. Improved performance, and what Land Rover says are “outstanding C02 emissions”, are expected.

Externally, it is quite obviously ‘a Range Rover’ and, as ever, the PR-speak talks about keeping the Range Rover’s DNA. For these first official pictures, the new model looks a lot less ‘boxy’ and upright than its predecessor, an impression enhanced by the fact that this model will be 118cm longer. Indeed the rear view looks particularly sleek. The result is more legroom in the rear for the occupants, who will be in an even more sumptuous and luxurious interior. They will need to pay for this, however, as while no prices have yet been announced, the model range is likely to start at around £65,000/£70,000 and rise to a significant £120,000 for the fully spec’d model. Ouch!

Orders open this September, with the model making its world debut at the Paris Motor Show, and the first models likely to hit the roads in early 2013. We will have a full technical review of the new Range Rover in next months’ issue. On page 20 of this issue, we describe how it is possible to pick up a second-hand Range Rover for as little as £1000; as if it wasn’t obvious before, this new Range Rover shows that the times are indeed a changing…