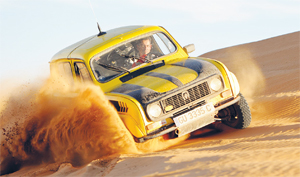 The first ever Maroc Challenge, covering some 2700km across Morocco, was a low-cost ‘rally raid’ event for both two and four-wheel drive vehicles. The actual route differed in places for the 4×4 vehicles, but the rules and regulations prevented ‘expensive’ vehicles from competing.

It was claimed by the organisers that the whole event could have been covered for as little as €1200. Vehicles that entered had to have been registered before 31st December 1995. Covering some of the routes of previous Dakar events, this was obviously an exciting opportunity to be involved in a rally raid. The winning 4×4 was actually a Renault 4 Sinpar (below). This was a special edition of the Renault 4 and entered the Paris-Dakar in 1979 and 1980… when it came home in third place!

The next four places were filled by Fiat Panda 4x4s. The event was heavily over subscribed and so there is going to be another one, taking place between 31st March – 7th April and therefore coinciding with the Easter holidays. Only 60 entries will be accepted. If you want to know more about the Maroc, check out the website: www.marocchallenge.org