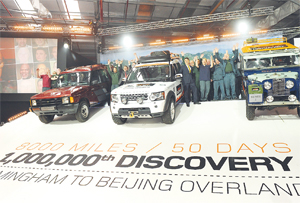 THE 1,000,000th Land Rover Discovery has left its ‘birthplace’ in Birmingham, to make a ‘Journey of Discovery’ by driving to Beijing in China – one of Land Rover’s fastest growing markets, and the country of an exciting new joint venture (see News page 13). The journey will be a 50-day, 8000 mile trip and will end at the Beijing Motor Show on 23rd April. The promotional tour also allows Land Rover the the opportunity to launch its ambitious fund-raising project for the company’s Global Humanitarian Partner, the International Federation of Red Cross and Red Crescent Societies (IFRC) which aims to raise £1million to support a water sanitation project in Uganda.

It is 23 years since the first Discovery rolled off the production line, as a model to sit between the Range Rover and Defender, and was built to counter the growing number of Japanese 4x4s that were arriving at the time, in what was then called ‘the leisure market’. Now a very different vehicle to that original, last year saw record sales of nearly 45,000 units sold across 170 worldwide markets. And despite the company no longer being owned in the UK, the Discovery is still an excellent example of this country’s design, engineering and manufacturing skills, as 83 per cent of production is actually exported from its West Midlands manufacturing base.