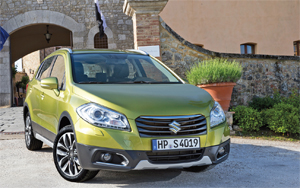 Suzuki’s first venture into the C-segment ‘crossover’ class will go on sale in the UK in October. The new SX4 S-Cross model will get its full European debut at the Frankfurt Motor Show this September. The first models to the UK will be the SZ3 1.6-litre petrol version and the 1.6-litre DDiS diesel option. The 4WD version will have Suzuki’s ALLGRIP four-mode system. The driver selectable modes will be Auto, Sport, Snow and Lock. Prices start at £21,549, rising to £23,549 for the 1.6 DDiS SZ5 ALLGRIP version.

Frankfurt will also be the world premiere of the iV-4, Suzuki’s new concept compact SUV, said to be “an indication of the direction which will be taken with the future model to be added to the company’s renowned SUV line-up.”