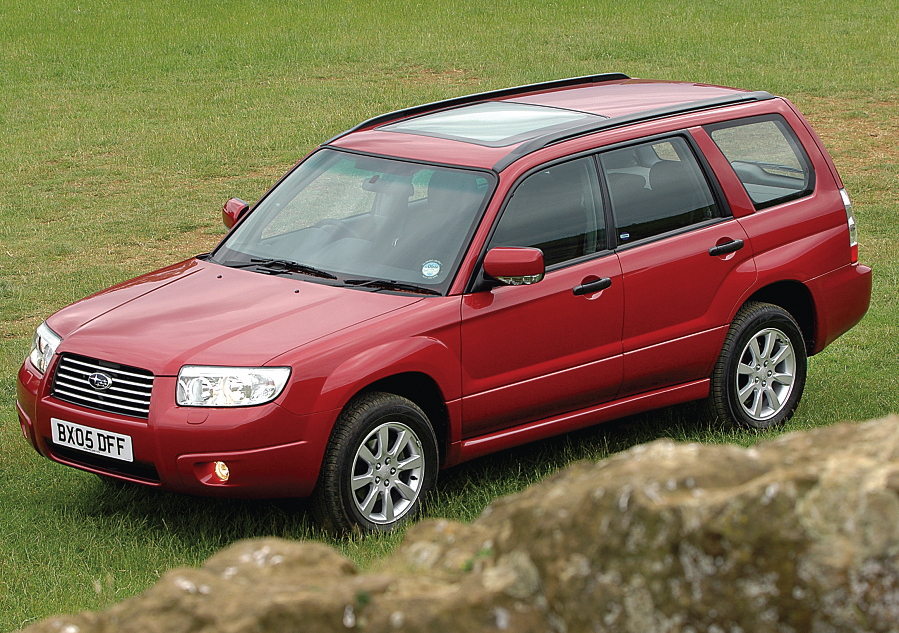 The Forester is an unusual crossover, not the usual estate-car-turned SUV. For most the name Subaru is synonymous with the high performance Impreza WRX with its rally car styling, 280bhp boxer engine and sophisticated permanent four-wheel drive system – then, out of nowhere, appears the Forester, a modest estate car with the most conservative styling ever applied to a new model, seemingly aiming it at older middle-aged gents with trilbys and tweed jackets, with interiors upholstered in cloth taken from the suits of even older gentlemen.

Badged X (for ‘crossover’) and touted as a rival to the Freelander, Honda CR-V, Toyota RAV4 and others of that ilk, the Forester appeared as fashionable as a pigeon at a peacock parade. Yet under that desperately ordinary body lies the same drive train as the car that in its time showed the way in the World Rally Championships. The turbocharged XT has a beefy 174bhp on tap in its original 2.0-litre form, the later 2.5XT has a hefty 226bhp, giving it the power to out accelerate many a hot hatch, while since the undertray is pretty much the same as the Impreza’s, the Forester also has almost unbelievably good high-speed handling and impressively comfortable ride on and off the road.

The non-turbo versions – slower but still a lot of fun to drive with their excellent handling and ride comfort – even have low range (with the manual gearbox) giving them, despite Subaru’s refreshing reluctance to clutter the bodywork with chunky ‘off-road’ cladding, truly impressive off-road ability. Oddly, although the Forester is patently a Freelander rival, Subaru seemed rather more keen to push the car’s performance credentials by offering a ‘style pack’ of front and rear bumper spoiler, rear roof spoiler and sill extensions as a £700 option which unfortunately did little to disguise the basically boring styling.

The result is a car that looks like the back of a small bus but is a total joy to drive and, in non-turbo dual-range mode is one of the most competent off-roaders in its class. Hence there’s no better choice if you want a practical compact estate with truly dynamic driving behaviour – whether it’s on the road with the turbo or off it with the low range gearing – as long as you don’t mind the uninspired styling or, possibly, if you’re in the habit of wearing a trilby and a tweed jacket and just happen to think the Forester’s styling is the absolute bee’s knees.

For all our mockery – and surprisingly since this generation lacked a turbodiesel variant – the Forester has proved popular, as is reflected not only in the wide range of cars available second-hand, but the wildly varying prices being asked for used examples, with £3000 buying anything from a high-mileage ’02 X to a ’06 XE with XTs, XTEs and Turbos inbetween, so it really will pay to shop around for the best-looking purchase.

Your first decision has to be whether you want normally aspirated or turbocharged, bearing in mind that the former still makes a sound family estate with good driving dynamics, and of course if you intend to do any off-roading with it the non-turbo manual is the only one that has low range gearing.

Whichever model you choose you’ll find acceptable luxury, since all versions of the Forester are well-equipped, standard features throughout the range including air conditioning, electric windows, remote central locking and four-speaker stereo with a CD player. The XT gets alloy wheels, which are also part of the optional ‘all-weather’ pack for the X, which includes a huge sunroof, front driving lamps, heated front seats and cruise control. Most of the X versions we’ve seen appear to have had the all weather pack – you’ll spot them by the big driving lamps in the bumper and the huge sunroof – so it’s worth making sure you get one with the full equipment package. Leather-trimmed special editions tend to command significantly higher prices, so much so that we’d happily do without the leather.

Probably the most significant concern if you’re buying an XT is to remember that the early examples had the racy but highly-stressed 2.0-litre engine, after ’04 the more relaxed 2.5-litre engine was fitted, but even then it’s worth finding the extra for an ’05 model with the higher-performance engine, 226bhp up from the original 208.

Reliability is better than many, though there have been some clutch and gearbox problems, make sure changes are slick and noiseless.