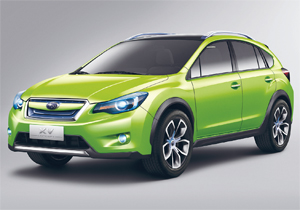 The Shanghai Motor Show saw the debut of the Subaru XV Concept, claimed to be “a new generation of crossover vehicle” – which is surely a case of slicing a niche even smaller and it’s hard to look at the first photographs and see anything much different to what others are already doing. It does, certainly, have a more aggressive stance than some crossovers, much of that due to the large, dramatic wheels. Whether they made it to production is not known. The front is most definitely a Subaru with the hexagon grille and the ‘hawk-eye’ headlights.

The XV concept has a panorama type roof of continuous glass (an option also available on the new Range Rover Evoque) and this certainly results in a sleek profile for the vehicle. The colour of the concept shown here has the marvellous name of Electro Yellowgreen. The yellowgreen (yes, it is apparently all one word) is continued with the interior for upholstery piping and instrument area. Under the bonnet is Subaru’s ubiquitous 2.0-litre flat four engine with the Lineartronic (CVT) transmission.