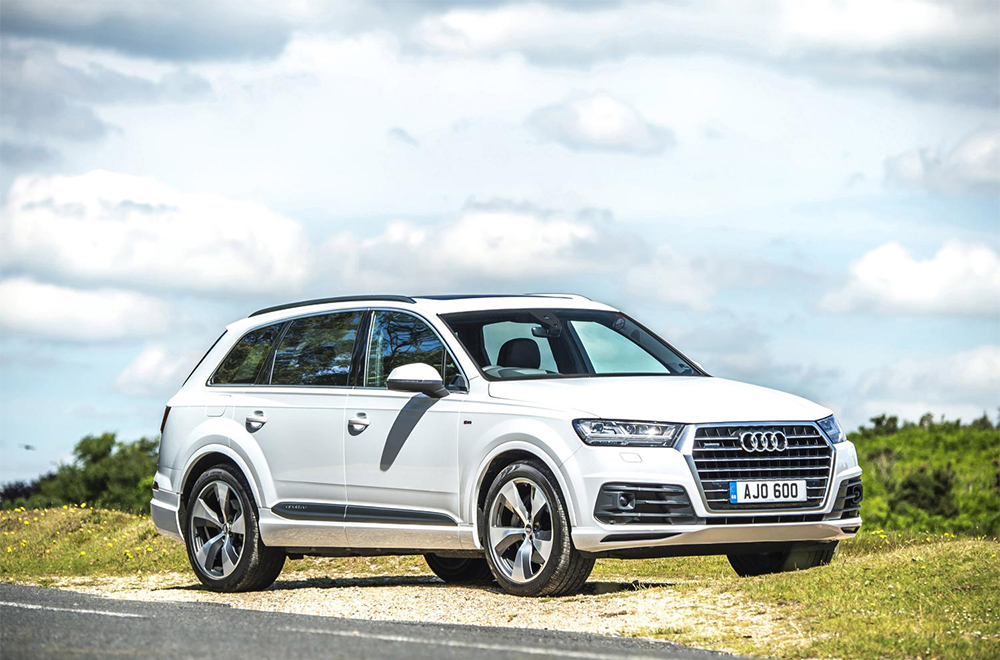 By jettisoning up to 325kg in weight compared with its predecessor the all-new Audi Q7 is perfectly placed to capitalise on the fuel-saving capabilities of advanced new engines like the 218PS V6 TDI, which has just joined the range. Complementing the 272PS version of this remarkably efficient and refined 3.0-litre unit, which spearheaded the launch of the re-engineered seven-seat luxury SUV, the new lower output option is capable of returning in excess of 49mpg with CO2 emissions of as little as 148g/km. The new Audi Q7 3.0 TDI quattro 218PS is available in SE and S line specification priced from £47,755 OTR, and is due with its first UK customers in October.

Despite its even more intensive focus on efficiency the new entry point to the Q7 range isn’t short-changed on performance. The EU6-compliant unit’s  218PS peak output, available from 3,250rpm through to 4,750rpm, and the 500Nm torque maximum it delivers between 1,250rpm and 3,000rpm, are slickly converted by the eight-speed tiptronic automatic transmission into a 0-62mph time of just 7.3 seconds and a potential top speed of 134mph.

Yet thanks in part to modifications to the water pump, oil cooler and combustion process, among other things, the SE version with its 19-inch alloy wheels and the S line with its 20-inch upgrade can deliver up to 48.7mpg according to the combined cycle test, equating to CO2 output of 150g/km. Customers who choose the SE, and who place particular emphasis on economy and efficiency, can specify a smaller 18-inch wheel as an alternative to further reduce consumption and emissions – with their help up to 49.6mpg is possible with emissions of 148g/km.

Another significant contributing factor to these impressive returns is the intensive weight optimisation programme that has shaved precious kilograms from the Q7 in every area from the suspension and drivetrain components to the body panels. The most notable savings were made in the multimaterial body-in-white, which is 71kg lighter than its predecessor, in the all-aluminium doors which strip away 24kg and in the chassis with its sophisticated new five-link suspension, which subtracts 67kg.

With the seven-seat configuration which is standard for UK models the Q7 weighs in a total of 240kg lighter than the same set-up in the outgoing model, and the weight discrepancy between old and new five-seat versions (a no-cost option in the UK) is an even more impressive 325kg. This not only gives a freer rein to the V6 TDI units but also reduces unsprung masses to enable the newly developed suspension to deliver the best possible ride comfort.

For the ultimate in unruffled travel an adaptive air suspension system, which itself weighs 10kg less than before, can be added at extra cost to keep the body consistently level and suppress the worst effects of the roughest of surfaces, no matter what the Q7 carries and where it ventures. The system was previously available only as part of the Dynamic Pack but can now also be ordered as a standalone option.

For consummate control in all weathers and on all surfaces quattro all-wheel-drive is fitted as standard. Managed by a self-locking centre differential which apportions 40 per cent of power to the front and 60 per cent to the rear under normal driving conditions, it can shift up to 70 per cent forwards and up to 85 per cent rearwards if either axle becomes overburdened.

All-wheel-steering as a segment first

All-wheel-drive can also be supplemented as an option in the new Q7 by all-wheel-steering – a unique feature in the SUV segment. At low speeds, the front and rear wheels turn in opposite directions, reducing the turning circle by up to one metre for noticeably easier manoeuvrability when parking and turning at low speeds. At higher speeds the rear wheels turn with the front by up to 3.5 degrees to enhance steering response and improve stability.

This ground-breaking technological sophistication is carried over into the interior. As a starting point, the latest MMI navigation plus incorporating an ultra-clear 8.3-inch electrically retractable monitor and large fingertip-reactive MMI Touch pad serves as a portal for a wealth of entertainment and infotainment content in the Q7, and trial access to the internet-based services and in-car web browsing opportunities offered by Audi connect is also included.

The Audi drive select adaptive dynamics system is standard for all versions, and enables the driver to alter the operating characteristics of the engine, transmission and new fuel-saving electromechanical steering across five driving modes – auto, comfort, efficiency, dynamic or individual.

When efficiency mode is selected, the S tronic transmission is disengaged from the driveline whenever the driver eases off the throttle to enable the Q7 to ‘coast’ in the interest of further fuel savings. When the adaptive air suspension system is specified, Audi drive select also enables the driver to select an allroad and lift/offroad function to increase ground clearance by 25mm and 60mm respectively.

The Audi virtual cockpit, which has already set a new benchmark in the TT and R8 sports cars, is available to replace the analogue dials in the binnacle with a 12.3-inch fully digital TFT display capable of presenting a classic view with high-quality rendered dial instruments or an infotainment view with an extended display area for lists and navigation mapping.

The Audi virtual cockpit can be specified individually or as part of a Technology pack which also includes a head-up display for projection of key information onto the windscreen in the driver’s eye line, high beam assist for sensor-controlled alternation between dipped and main beam (standard for S line models), the Audi phone box for wireless connection of mobile phones to the Q7’s aerial, plus inductive charging of Qi-enabled handsets, and a three-year subscription to Audi connect services.

Two high quality audio systems from Bose and Bang & Olufsen can also be specified to deliver remarkable 3D sound through the use of additional speakers in the A-pillars which provide the spatial dimension of height. Rear seat passengers can also be treated to the Audi Entertainment Mobile, which includes two detachable 10.1-inch high definition touch screens which can be attached to the front seat backs. These can stream content from iPhone or Android smartphones via different sources, including an Audi app, the integrated SD card reader, USB, Miracast WiFi or Bluetooth.

Later this year the Audi smartphone interface will also become available on the options list, integrating many of the functions of iOS and Android mobile phones into the Audi MMI system and replicating the distinctive look of each operating system on the MMI screen using “Apple Car Play” and “Google Android Auto”.

If a compatible iOS or Android cellular phone is connected to the USB port, the respective environment opens in the Audi smartphone interface. Both platforms offer navigation functions, missed call/appointment reminders and messaging functions, as well as a wealth of music playback options. Over time, these will be augmented by numerous third-party applications such as Pandora, Spotify and WhatsApp.

LED daytime running lights are common to both versions, and in the S line, LED headlights also replace the SE version’s standard Xenon plus units. These are also complemented as part of S line specification by a high beam assist function and dynamic rear indicators, which sweep sequentially from the inside out for better visibility when turning.

Both light sources can also be replaced as an option by Matrix LED units comprising banks of LEDs capable of reacting individually to the presence of oncoming and leading cars. When high beam is activated and sensors detect cars in the vicinity they can dip or fully extinguish individual LEDs, directing corridors of light around the traffic to maintain maximum visibility of the road and surrounding environment without causing disruption to other drivers. The Matrix LED option also includes dynamic rear indicators for SE models.

An array of innovative optional driver assistance systems can also act as a second pair of eyes for the driver of the new Q7 during a wide range of everyday manoeuvres such as reversing out of a perpendicular parking space into moving traffic, pulling out of a junction into crossing traffic and exiting the car on a traffic-clogged road. Thanks to an evolution of adaptive cruise control incorporating a traffic jam assistant the Q7 can even take over steering duties on marked roads if traffic is moving at below 37mph.

Cabin space and the archetypal Audi quality of finish have always been Q7 virtues, and both are improved upon in the new model. Across the three rows of seats, upholstered in supple Twin leather in the SE or leather and Alcantara in the S line, headroom has increased for both front and second row passengers, and when the third row is surplus to requirements it can now be more easily stowed to make room for luggage thanks to a new powered folding mechanism which is standard. A total of 770 litres of luggage space is available when seven passengers are on board, or up to 1,955 litres if only the front seats are occupied.