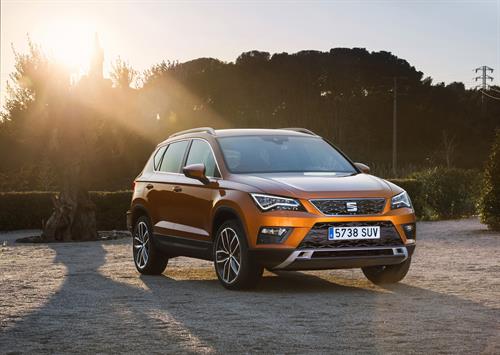 Following its highly acclaimed world debut at the Geneva motor show a few weeks ago, SEAT has confirmed full UK pricing and specification for its first SUV, Ateca. Priced from £17,990, the Barcelona-based marque is looking to make quite an impact in the UK’s compact SUV market.

Which, judging by the initial signs for SEAT’s latest creation, staking its claim in the fast-growing segment shouldn’t be too difficult. For starters, in several key European markets, including France and Germany, where ordering has already opened, Ateca is already proving quite a hit, even before customers have got behind the wheel.

The entry-level S has all the essential kit which a growing family or young-at-heart couple might need. On the inside, the interior includes air conditioning, Media System Touch five-inch touchscreen with USB and SD connectivity, leather steering wheel and gearknob, plus split-folding rear seats with reclining function. On the outside, Ateca’s stylish lines are complemented by 16-inch ‘Design’ alloy wheels and LED daytime running lights.

Rounding off the initial UK line-up, at least until the ‘First Edition’ version is confirmed in May, is XCELLENCE. The new flagship trim ushers in a plethora of enticing premium features, including four new innovations for SEAT. The first is a Connectivity Hub with Wireless Phone Charger which also boosts in-car phone signal, as well as multi-colour interior ambient lighting with LED interior illumination and a choice of  eight colours. Penultimately, comes an ‘Ateca’ welcome light silhouette which is projected onto the ground from the bottom of the door mirrors, and finally, SEAT Drive Profile with Driving Experience selector. This latest evolution of the brand’s tried and tested technology allows the driver to adjust Ateca’s set-up (steering, throttle response and gear change speeds – the latter on DSG-equipped versions) according to road and weather conditions or personal preferences, including Off-road and Snow modes on four-wheel-drive versions.