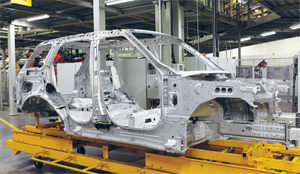 Jaguar Land Rover owner and Tata chairman, Ratan Tata gave an interesting interview in the Indian press this month. He was commenting on a deal for a new low-cost aluminium smelter, a joint venture between the Saudi Arabian Mining Company and Alcoa (the world’s leading producer of primary aluminium), being built in Saudi Arabia. This new factory would make the production of aluminium highly competitive and which could, said Ratan Tata, offer an “interesting business case” for the company. Now, given that the new Range Rover is built using a comprehensive aluminium monocoque, is it too large a leap to consider that Tata might indeed look at some sort of JLR production in Saudi Arabia? The vehicles would be closer to an important market, that’s for sure. (Our full, detailed, technical insight into the new Range Rover starts on page 38 of the November issue).