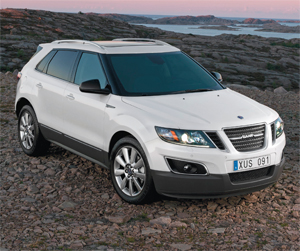 Saab’s new 9-4X crossover should be in our showrooms later this year. Aimed as a competitor to the BMX X5, luxury 4×4 range, the car is actually built at the Ramos Arizpe plant in Mexico, due to the company’s association with General Motors. That could well explain the fact that when looking at the photographs, the Saab 9-4X certainly looks like a North American SUV, rather than something from a quirky and highly original Scandinavian company. Scandinavian Saabs also had a good reputation for reliability and build quality, which will be something that will be very important to this market. It’s good to see, however, that the starter button remains between the seats, near the gear lever – that’s traditional for Saabs, and very confusing when you sit in a Saab for the very first time!

At present it is available with only one engine option; a 2.8-litre V6 petrol turbo unit with a claimed 300bhp, pushing the 9-4X to a claimed top speed of 143mph. Interestingly the Saab 9-4x has been ready for production for over two years, but was delayed due to the negotiations between Saab and General Motors. Whether that will make the new Saab, appear a little out of date remains to be seen. Prices and detailed specifications have not been revealed, but you can expect the model to be in the £40,000 price range.