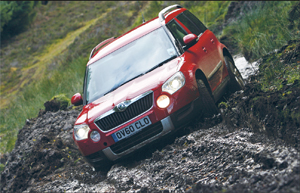 Last month, Volkswagen signed a deal with Russian manufacturer GAZ to assemble VW and Škoda models in its Russian Nizhny Novorod plant. This is a significant deal, in that the planned production is to rise to 110,000 vehicles per year, and the agreement runs until 2019. GAZ is to build the Volkswagen Jetta, Škoda Octavia and Škoda Yeti models for the Russian market and the first models are due to roll off the GAZ production line in 2012.

We reported on the Russian market in last month’s issue, with our St Petersburg correspondent (!) Robb Pritchard driving the awesome Kombat T98. In the same feature, Robb described the popular Lada/Chevrolet Niva 4×4 – a cheap and cheerful Russian-built off-roader. It will be intriguing to see how the very successful Škoda Yeti fits into this market. To that end, it is interesting to note that part of the memorandum agreement between VW and GAZ also includes ‘a comprehensive training programme for employees in Nizhny Novorod’. Škoda now has a very good reputation in Europe and obviously the company does not expect that to drop in Russia.