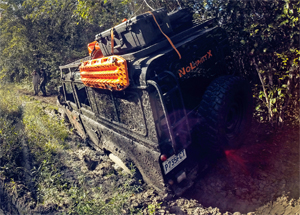 Toby Savage joins a Camel Trophy style expedition in deepest Guatemala in search of undiscovered palaces. Part One of this story explains how Toby found mud. Lots of mud…

When my pal, Jason Paterniti, emailled me from the States back in August 2013 asking if I fancied a Camel Trophy style drive through the jungles of Guatemala early in 2014, I waited a full 10 seconds before answering the affirmative. To reassure me that I had made the correct decision, Jason then sent the small group of us who had agreed to his wild plan, links to the 1995 ‘Mundo Maya’ Camel Trophy event that used some of the tracks we were actually going to drive. Our plan was to cover about 1000 miles over 12 days, visiting several difficult to reach Mayan Archaeological sites and, to give the project some vague justification, we were to meet with a group of Archaeologists from San Diego University to try and confirm that potential new Mayan sites identified by remote sensing (staring long and hard at Google Earth) could indeed be outlying tombs on the already excavated El Zotz site.

The Mayan Civilisation existed in Central America from roughly 2000 BC until as recently as the 13th Century and their descendants live and farm the area to this day, but have largely integrated with other races to become a generic group of Central Americans. In their heyday they built some remarkable structures such as tombs and palaces, some of which have been excavated and preserved as tourist attractions, but many others are still buried under 1000 years of jungle. With excavation costs and the logistics of even getting to them being very expensive, it is likely that they will remain buried for many years

To add a little spice to an already exciting expedition, three teams representing America, UK and France would be competing for the Mundo Maya Challenge Cup – a rather tacky trophy made of solid gold plastic! Points would be awarded along the same lines of those in the real Camel Trophy event and in true French style their sole entrant Jerome pulled out before the event even started to be quickly replaced by honorary Frenchmen Doug ‘Frenchie’ Inglis, snatched from his job as a Marine Archaeologist in Hawaii.

We all met at a hotel in Flores, Guatemala and over a few beers discussed plans with our logistics partners ‘No Limit Expeditions’ who had two very smart Land Rovers parked outside, not dissimilar to the legendary Camel Trophy 110s – A 200 Tdi Defender Station Wagon and a 4.2-litre V8 110 pick-up, both heavily loaded with equipment and supplies. James Brown and Graham Jackson were to be our drivers, mechanics, cooks and bottle washers for the next 12 days and James’s career as a chef hinted that we would at least be eating well, while Graham’s extensive experience in overland expeditions assured our safety and, hopefully, an ability to negotiate whatever lay ahead. The word was that recent unseasonable rain had rendered many tracks un-negotiable by anything other than a boat, but James was still reasonably optimistic about being able to drive to Nakum, an important Mayan site just 17 miles away and accessible by a track he had driven the previous year.

Toby and team were well looked after by NLX who run bespoke adventure tours in Central America and Africa using Land Rovers exclusively for their dependability and strength. The two in use in Guatemala had uprated suspension and full roll cages in the interests of passenger safety and carried enough gear to cope with every eventuality. Two way radios assured good communications between trucks and meals were a delight thanks to team principal James’s previous career as a gourmet chef. See their website for details of forthcoming adventures to suit all those who really want to ‘go beyond’.  www.nolimitx.com