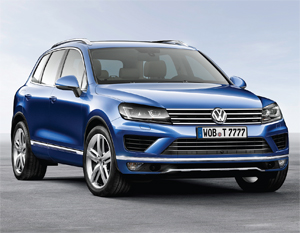 China was the venue for the unveiling of the revised Volkswagen Touareg. The new front end has larger headlamps, which are now bi-xenon across the whole range, not just the top end. There’s a deeper new radiator grille and re-profiled bumper, giving the vehicle a ‘wider’ appearance. A new wheel design and new paint range complete the redesign. Lower resistance tyres have been fitted, with stop/start and a battery regeneration system fitted to aid economy, which has increased and emissions, which are reduced. The entry level 3.0-litre V6 TDI remains as before, while the 242bhp version has been increased to 255bhp. The V8 and Hybrid versions will no longer be available in the UK. Orders for the new models in the UK start in August with deliveries expected by November.