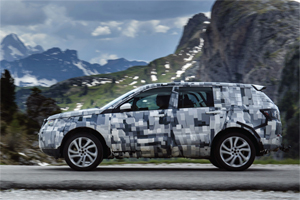 We recently received photographs of the new Discovery Sport. The team at JLR are becoming nearly as good at global publicity as they are at actually making vehicles, but this latest ‘reveal’ is simply out of this world as it is linked with the Virgin Galactic space programme. Earlier this year, when the initial Discovery Concept was unveiled in New York, it shared the stage with Virgin’s proposed Galactic commercial spacecraft. It seems that the two companies have been working together on the projects, including all the testing and development of the forthcoming Discovery Sport. No less than 181 protorypes have been used, covering some 750,000 miles and 9767 different tests. This has included driving in temperatures of minus 36degC in North America, and up to 42degC in the deserts of Dubai (two major markets for the proposed vehicle). It is also said to have been tested in water depths of 600mm, inclines of 40deg, and declines of 45deg. The camouflaged prototypes shown here give little away; a quick glance and you could be forgiven for thinking you are looking at a Range Rover Sport. The actual official global ‘reveal’ of the new Discovery Sport will take place on 3rd September, which planet that will be on has yet to be announced.