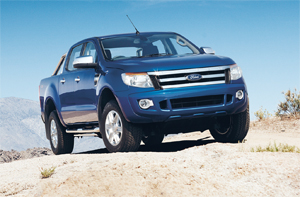 The all-new Ford Ranger will be on show at the Ford stand at the NEC, Birmingham, after debuting at Geneva, during the Commercial Vehicle Show in April. The new pick-up features Adaptive Load Control, Trailer Sway Control, Voice Control and the segment’s first rear-view camera system.

On sale around November this year and available in three different cab body styles, there are two ride heights and four series choices. With an all-new chassis frame, front and rear suspension and steering system, towing capability is now 3300kg, up 300kg on the current model.